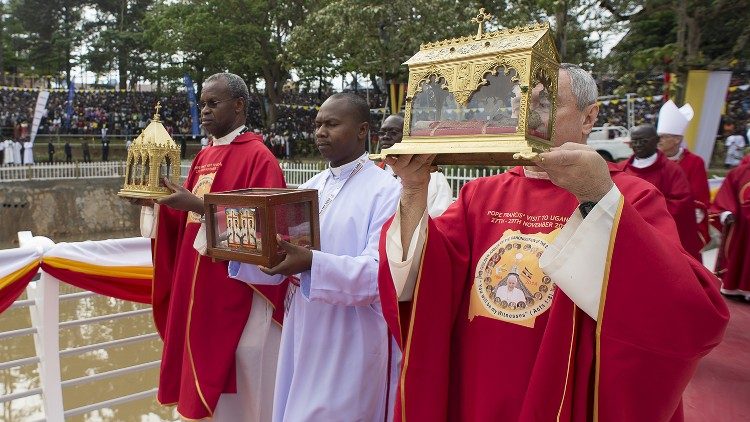 Fort Portal is located in the western region of the country.

Apart from the enormous financial and logistical challenges on the host diocese, Uganda’s Martyrs Day celebration is a window for the host diocese to showcase their faith, culture, dress, languages and church music to the nation.

The last time Fort Portal Diocese hosted the Namugongo celebrations was in 1997. According to the current Bishop, Robert Muhiirwa, times have changed. Celebrations then used to be a small event with about 300 people in attendance. Today, as the popularity of the martyrs has spread wide, Martyrs Day Mass attracts millions of pilgrims. Fort Portal’s choirs have been practising for months –literally. The bar is set high each year, and choirs are expected to lead pilgrims in a memorable performance.

The blood of martyrs, seed of Christians

Christ does not wish for Christians to put themselves in harm’s way yet it is still true that sometimes, the blood of those that die because of their Christian faith gives birth to even more Christians.

“The theme is reflected in the way the martyrs died, they were men of faith baptised with water, but some were not yet baptised (baptism of blood). They had a great love for Christ. That is why they opted to die than obey the orders of Kabaka Mwanga. They were not threatened by the sword or fire. With love and hope, they looked to the life after death and resurrection without any fear,” Bishop Muhiirwa told Ugandan media.

Although “a threat environment still exists in the country,” authorities assured that there were no known credible or specific threats towards the Uganda Martyrs Celebrations in Namugongo. The spokesperson said that Uganda’s joint security Task Teams were camped at all commemoration venues in Namugongo and would continue to review their level of preparedness and assessments of threats and vulnerabilities.

“We have worked on intelligence and analysis, profiled all venues, hotels and hotspots in the area, to help identify potential risks and taken steps on how to address them,” said Enanga Fred.

The Police spokesperson nevertheless urged pilgrims, faith-based tourists and well-wishers to remain vigilant and focused about their personal security. He encouraged visitors, when necessary, to use the Uganda Police Mobi App or call any of the following emergency numbers: 0800199699, 0707600773, 0776999135.