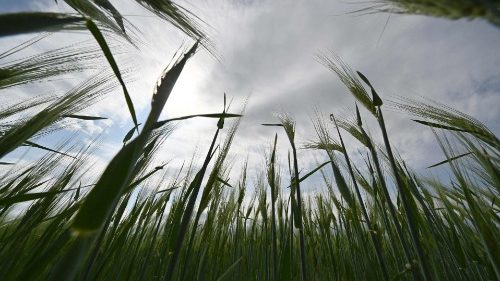 Pope Francis expresses great concern over warnings of grain shortages worldwide due to the war in Ukraine, and appeals for “every effort to be made” to “guarantee the universal right to food.”

Pope Francis has appealed for an end to the blockade of grain exports from Ukraine.

At the conclusion of his weekly General Audience, the Holy Father again turned to the ongoing war in Ukraine.

“Of great concern,” the Pope said, “is the blockade of grain exports from Ukraine, on which the lives of millions of people depend, especially in the poorest countries.”

Every effort to guarantee universal right

“I earnestly appeal for every effort to be made to resolve this issue and to guarantee the universal human right to food.”

“Please do not use wheat, a staple food, as a weapon of war!” he appealed.

The Holy Father decried the likely shortages of grain, which has been caused in part by Russia’s invasion of Ukraine.

The United Nations warns a global food crisis is looming. It is trying to broker a deal to unblock Ukraine’s grain exports, despite Western leaders blaming Russia for holding the world to ransom by blockading Ukrainian ports.

The price of grain, cooking oil, fertiliser, and energy have soared as the war continues, and as Western nations impose sanctions on Russia in response to its invasion of Ukraine.

To help avert the crisis, Ukraine is trying to export its vast stores of grain by road, river and rail, but agricultural officials note it has no chance of hitting its targets unless Russia lifts its blockade of Ukraine’s Black Sea ports.

Ukraine and Russia together accounted for nearly 30 percent of the world’s wheat exports in 2021, and wheat prices have risen by over 50 percent since the start of the year.

Pope’s prayers for peace and to end wars

Pope Francis has made countless appeals for peace in the war-torn country, as well as for an end to the war in Ukraine and to wars around the world.

On Tuesday evening, closing the Marian month of May, Pope Francis prayed a Rosary for peace for these intentions in Rome’s Marian Basilica of St. Mary Major.

On 25 March, Pope Francis consecrated all humanity, especially Russia and Ukraine, to the Immaculate Heart of Mary in St. Peter’s Basilica, and said the act expressed our complete trust in the Virgin Mary in the midst of the “cruel and senseless war” in Ukraine.