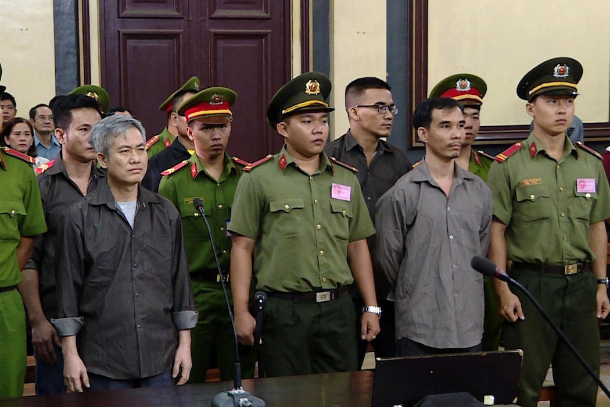 A court in southern Vietnam has sentenced five pro-democracy activists, including a Buddhist monk, to a total of 57 years imprisonment for allegedly trying to topple the communist government.This came amid a wider crackdown on dissent.A court in Ho Chi Minh City on Oct. 5 imposed jail terms of 15, 13, 11, 10 years and 8 years respectively on Luu Van Vinh, Nguyen Quoc Hoan, Nguyen Van Duc Do, Tu Cong Nghia and the monk, Venerable Thich Nhat Hue.They were convicted of conducting political activities aimed at overthrowing the government, under a provision of the country’s penal code, because they were campaigning for the introduction of multi-party democracy.All five were arrested in November 2016 and remanded in custody.Vinh’s wife, who watched the trial on a television monitor, said the men were unfairly treated.”He is our pride,” the mother of one said on Facebook.Defence lawyer Nguyen Van Mieng said the convicted activists believed there was a lack of evidence to support the allegations against them.Another lawyer, Nguyen Van Dai, a Christian from a group called Brotherhood for Democracy, said the charge asserted that there had been attempts to bring down the ‘people’s government’ but in reality Vietnam is a one-party state.The five defendants were only exercising their human rights by seeking democratic rule, Dai said after the verdicts and sentences were handed down.He said the government was committing “cruel crimes” against the people.Minar Pimple, Amnesty International’s Senior Director for Global Operations, said the convictions were aimed at stifling free speech.Minar, who was refused an entry visa to speak at an event called the ‘World Economic Forum on ASEAN’ in September in the capital, Hanoi, called on Vietnam to immediately release the imprisoned men.Thirty people have been arrested in the past five weeks for purported crimes such as blogging, using Facebook and other peaceful pursuits, he said

Pope warns youth against populism, at Synod in Rome

One year after Hurricane Maria, can Puerto Rico be made whole?