One year after Hurricane Maria, can Puerto Rico be made whole? 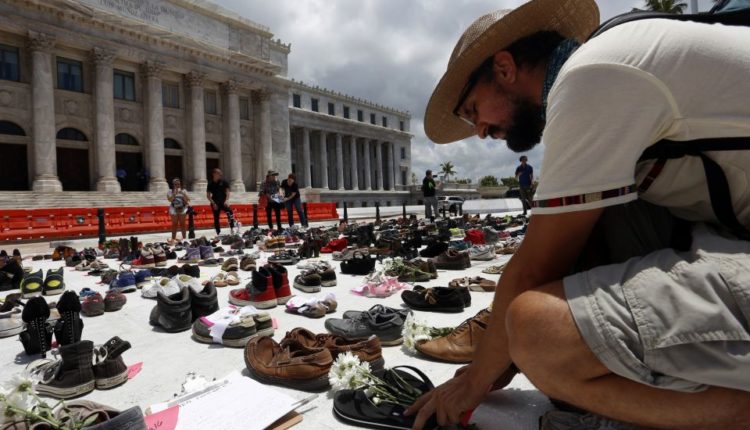 September came at me like a ton of bricks. The anniversary of Hurricane Maria striking Puerto Rico (Sept. 20, 2017) triggered all sorts of emotions. I found myself cringing in agony remembering images of the hurricane barreling toward the island. Other times I cried remembering the total darkness and radio silence that overcame the island. But I also felt rage and frustration that a year after this cataclysm many sectors of the island are no closer to recovery than before.

The devastation that came upon all of Puerto Rico’s residents was swift and long lasting. Now that the high emotions of the anniversary have waned, my mind has turned toward the question of what justice looks like for impacted populations in an age of climate change and environmental catastrophes. Specifically, I am remembering words from President Trump a few weeks after the hurricane when he essentially declared that the U.S. could not make Puerto Rico whole again considering its financial woes before the hurricane.

Puerto Rico does not need to be made whole again. Making a community whole again assumes that a return to a pre-catastrophe state is the optimal form of recovery for all members of that community. This neglects the ways different socio-economic and geographical sectors shouldered different vulnerabilities at that time, and risks reproducing these vulnerabilities and inequalities well into the future.

It also suggests that as a society we cannot do any better than replacing a tree, a door or a shop in the exact same way as it was before without questioning the political dynamics that promoted that state of affairs to begin with, or without thinking about more just and humane ways to develop communities impacted by climate change.

Justice in the time of climate change demands a vision of wholeness that builds renewal of communities into the future, toward a political and economic reality that secures sustainability for these communities.

What follows is a sample of what justice as remembering into the future might look like in light of the challenges Puerto Rico faced during the first year post-Maria.

Twelve months of darkness! The general consensus was that Puerto Rico’s power infrastructure was severely vulnerable at the time the hurricane hit. Among the reasons for the failure of the grid is its dependence on the burning of imported oil. Constructed at the time Puerto Rico was industrialized, it was built to serve the purposes of U.S. manufacturing interests. Many of the 2,975 deaths officially attributed to the hurricane were from a lack of power that impacted access to key medical care and supplies.

In the aftermath of hurricane Florence this past August, the small fraction of homes and businessesthat receive power from renewable sources  were able to draw power from these sources soon after being hit by the hurricane. Solar and wind power are considered more resilient in the face of natural disasters. In Puerto Rico a number of mutual aid and community empowerment groups stepped up to the challenge of redesigning essential needs and services powered with renewables. But these localized efforts cannot power an entire island. Federal commitments to developing networks of renewable energy resilient to climate change must be a central dimension of remembering into the future for thriving and sustainability.

Dirty water! Lack of access to safe drinking water was the next extreme challenge for the island. Driving on island roads just one week after the hurricane I saw folks stopped on the side of the roads facing mountains and rock formations, holding up containers to gather the water that fell off the rocks from small rivulets. The threat of illness from untreated water was real. A radio show interviewed a mayor who was able to divert the municipal generator from supplying power to the town hall and toward the town’s water well, thus providing clean water to residents within hours of the hurricane. This case illustrates a concern that oftentimes municipalities and townships are left quite adrift to manage extreme catastrophes on their own.

Elsewhere, mutual aid groups developed collaborations with Puerto Ricans in the diaspora to bring water condensation machines to communities on the island. Remembering into the future promotes and enables networking around this essential need, to strategize and move past old paradigms for water supply and storage, and develop a much more collaborative approach than what has been witnessed so far in recovery efforts.

Honesty for the deceased! Over a year later, President Trump still denies the number of dead from Hurricane Maria. This terrible injustice denies the pain and suffering many have endured this past year, seeing their loved ones suffer and succumb as a result of mismanaged or altogether absent recovery efforts. We remember the name of Ernesto Curiel who died of a heart attack after having to climb countless flights of steps back and forth to get his insulin from the only working refrigerator in his building. We remember the name of Alejandro González Vázquez who took his life after not being able to get his antipsychotic medication. There are 2,975 (at least) such stories.

Honesty with the real demands that we consider the kinds of remembering that bring us into a more humane and just future. Silence about the suffering of the past is an injustice. It denies that conditions were, and still are for some, dangerous and inhumane. It prevents us from remembering into the future options that take these failures into consideration as we build communities of resilience that can survive and overcome these dangers. In the task of remembering into the future the dead have many lessons to teach us.

Alternatives to schools and education! Closest to my heart is the way in which children paid a dear price for the inadequate and unjust response to the hurricane. Out of school for months, and studying by the light of candles, children then had to endure the closing of over 230 schools before the start of this academic year. Lower enrollment due to mass exodus right after the hurricane, as well as crumbling budgets, mean that schools are no longer seen as a good investment in Puerto Rico. Catholic social teaching promotes that every human being is deserving of an education (Gaudium et Spes, 26).

In the aftermath of Hurricane Maria many schools were the only solid structures that survived the buffeting of the storm. These schools became community centers where some classrooms were used as makeshift primary care facilities, others were used as one-room apartments for displaced families, yet others became distribution centers for essential supplies. And some classrooms were used as, well, classrooms. Remembering into the future inspires innovation in developing educational models that take communities in crisis into account so that they will bemore readily prepared for the shocks that await in the years to come.

Remembering Maria — its devastation and its victims — should include remembering into the future. It ought to open spaces to envision wholeness in ways that transcend previous dynamics of inequality, coloniality, decay and a nearly exclusive dependence on oil. Justice in times of climate change call for us to do something quite different: to join those impacted in remembering into a future in which all can thrive.