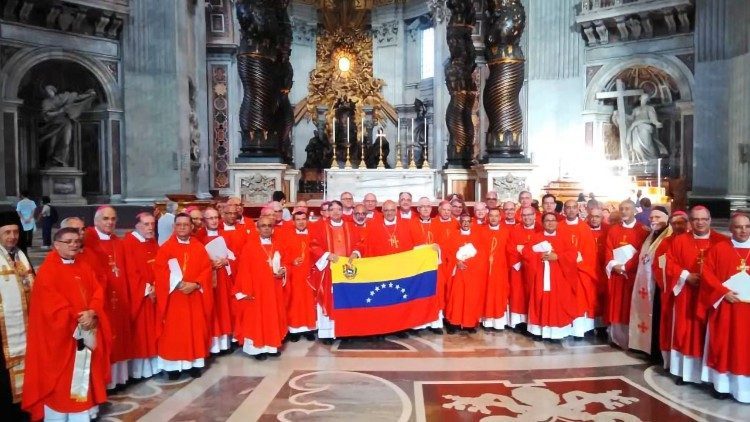 Pope Francis met with the catholic bishop’s conference of Venezuela on Tuesday – the day of Our Lady of Coromoto, Patron saint of Venezuela. The bishops were in Rome for their Ad Limina visit and used the meeting to shed light on the harsh economic, social and political realities Venezuela is currently facing.

The value of the Church in Venezuela

Archbishop Luis Azuaje Ayala, President of the Catholic Bishops’ Conference of Venezuela, and Archbishop of Maracaibo, spoke in a press conference later, saying that “The Pope did not simply listen to us, he expressed himself on the importance and value of the Church in Venezuela.”

Amongst the victims of the crisis Venezuela has found itself in is, in fact, the Church. With priests and entire communities forming part of those who are fleeing the country.

Archbishop Azuaje divided migrants into three waves. The first, he said, are those who emigrated to Venezuela years ago and are now returning back to their countries of origin. The second are the businesspeople, who are migrating to find work elsewhere, leaving a huge social void. The third, and those in the most difficult situation, are the poor. They leave on foot with absolutely nothing to their name, including documents, and walk thousands of kilometers to reach any Latin American country. Once they have arrived, explained Archbishop Azuaje, they then have difficulty settling in due to social and judicial insecurities.

Bishop Moronta, Vice President of the Venezuelan Catholic Bishops’ Conference, spoke to Vatican News. Regarding migration, he said that Venezuela has always accepted migrants. He described Venezuela as an “impoverished rich country” from which people are fleeing, in some cases to seek quality of life, and in others, survival.

Archbishop Azuaje explained that nowadays, any profit made from one’s job is worthless, stating that it has led to “scarcity and speculation”.

The scavenge for food

Archbishop Azuaje reported having witnessed people scavenge amongst rubbish bags in search of scraps of food. He told Pope Francis that “many deny” and that others “disguise” the hunger that surrounds the country.

The lack of health and sanitation is another topic the bishops brought up, stating that each time they leave the country they travel with a long list of medication that their families, friends, priests and other acquaintances have asked for. They describe the situation as a “disaster”.

Pope Francis is urging the bishops to “stay close to the people of Venezuela, especially to those who are suffering”. Archbishop Azuaje concluded stating that “for us, it is essential to open a channel in order to receive aid, food and medication from different parts of the world”.

Bishop Moronta has issued an appeal to the International community to first of all be aware of the fact that the problem is serious, and then, he asks them to stand by the side of those who are being exploited rather than those doing the exploiting.

Acquittals in the death of Fr. Machozi dismay local residents

Time to hand in your gun and badge, Mr Najib