Time to hand in your gun and badge, Mr Najib 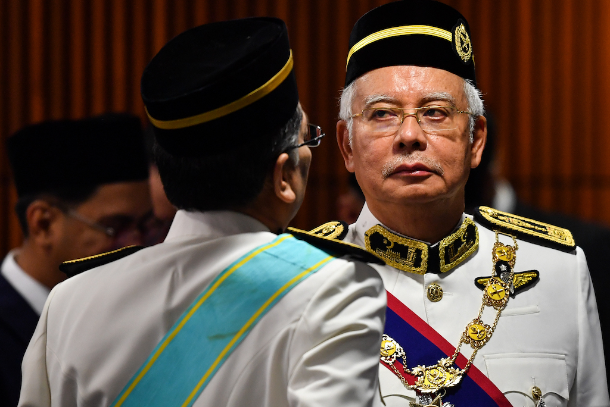 When Najib Razak was sworn in as Malaysia’s leader in mid-2009, his premiership was marked by spectacular promises of reform. He committed to tackling poverty, restructuring Malaysian society and promoting public service.Then came the riveting, still resonant 1MDB scandal followed by the stunning defeat of his long-ruling Barisan Nasional coalition government in May’s general election.Widely reviled as the country’s worst-ever leader, he was ejected from his party’s presidency, barred from leaving the country and charged with crimes under Malaysia’s Anti-Money Laundering, Anti-Terrorism Financing and Proceeds of Unlawful Activities Act.Police raided his home and hauled away boxes of cash, jewelry, handbags, watches and other valuables amounting to nearly US$275 million. It was all part of an investigation into how billions of dollars went missing from the country’s 1MDB investment fund.Najib’s entry into politics came in 1976. The national outpouring of grief following the death of Abdul Razak helped Najib win election unopposed as a member of parliament at the age of 23

Pope Francis at Mass: Mercy is the Christian “style”