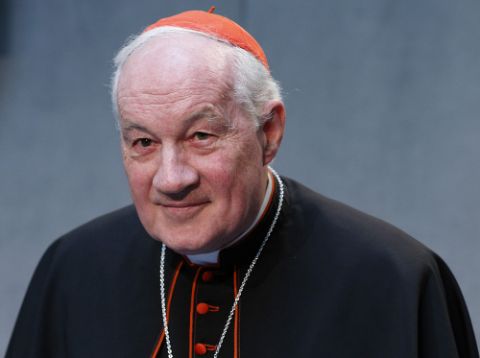 In an unprecedented three-page missive filled with a kind of forceful language rarely shared publicly between two Catholic prelates, Cardinal Marc Ouellet tells Archbishop Carlo Vigano his actions have been “extremely immoral” and that he has made an “unheard of and undeserved blow” on Pope Francis’ moral authority.

But the prefect of the Congregation for Bishops also reveals for the first time that McCarrick, who resigned from the College of Cardinals in July following revelations of abuse of seminarians, had been under Vatican instruction to refrain from public activity as early as 2011.

Although Ouellet says those instructions did not amount to formal “sanctions,” as Vigano alleged in an 11-page “testimony” released on Aug. 26, the cardinal says McCarrick had been encouraged to lead “a life of discretion, prayer and penitence” because of “rumors about his behavior in the past.”

“It is false to present these measures taken against him as ‘sanctions’ decreed by Pope Benedict XVI and cancelled by Pope Francis,” Ouellet tells Vigano, adding that an examination of the archives of his office made clear “that there are not documents regarding this matter signed by either pope.”

“Nor are there notes … that tell of a mandated obligation for archbishop emeritus McCarrick to silence and a private life, with the force of canonical penalties,” the cardinal continues. “The reason is that, unlike today, there was not then sufficient proof of his alleged guilt.”

Vigano, an Italian, served as the Vatican’s ambassador to the U.S. from 2011-16. In his earlier 11-page testimony, the former diplomat had claimed, without providing evidence, that Benedict had placed some form of sanctions on McCarrick in 2009 or 2010, and that Francis had lifted those sanctions.

Vigano’s document, which was laced with ideological claims and has since been revealed to have been drafted with the help of several right-wing figures, rocked the leadership of the global Catholic Church with its allegations that dozens of high officials knew of McCarrick’s abuse of minors.

McCarrick, aged 88, served as archbishop of Washington from 2000-06. The Vatican ordered him out of ministry in June after an allegation of sexual abuse was found “credible and substantiated.” In July, he became the first U.S. prelate to resign from the College of Cardinals.

In his open letter responding to Vigano, Ouellet is forceful and intense, telling the former ambassador at different times that his claims are “incredible and absurd,” “aberrant,” “a very painful wound” on the church, and “unjust and unjustified.”

Ouellet opens his missive — which was released unusually by the Vatican mid-morning Oct. 7, a Sunday — by saying that he is writing with “pontifical permission” to offer his “personal testimony … on the sequence of events regarding the archbishop emeritus of Washington, Theodore McCarrick, and on his presumed ties with Pope Francis.”

The cardinal says his testimony — released in French with a working Italian translation — is based both on his “personal contacts” and “the documents within the archive of the Congregation, which are currently the subject of a study to bring light on this sad case.”

Ouellet first rebuts Vigano’s claim that the ambassador had informed Francis about allegations against McCarrick in a brief June 2013 encounter on the sidelines of a meeting with dozens of papal diplomats.

“I doubt strongly that McCarrick interested [the pope] to the point that you would have us believe, as at that time he was an archbishop emeritus of 82 years old and had been retired for seven years,” states the cardinal.

“Moreover, the written instruction prepared for you by the Congregation for Bishops at the beginning of your service in 2011 did not say anything about McCarrick, except what I told you vocally about his situation as a bishop emeritus who had to obey certain conditions and restrictions because of the rumors about his behavior in the past,” he continues.

Ouellet says that he himself is “amazed” that McCarrick was able to climb through the highest ranks of the church despite what is known now about his abuse of seminarians, but says the prelate “knew how to defend himself from the doubts raised about him with great skill.”

“It must be understood that the decisions taken by the Supreme Pontiff rest on the information available at that precise moment and which constitute the object of a prudential judgment that is not infallible,” says the cardinal.

“It seems unfair to me to conclude that the persons responsible for the discernment are corrupt,” he states.

Ouellet tells Vigano that accusing Francis for covering up for McCarrick “seems incredible and absurd from all points of view.”

“I cannot understand how you could convince yourself of this monstrous accusation,” says the cardinal.

“Francis had nothing to do with McCarrick’s promotions in New York, Metuchen, Newark and Washington,” he states, making reference to the fact that the ex-cardinal was made bishop of the last three cities by then-Pope John Paul II. “[Francis] dismissed him from his dignity as a cardinal when a credible allegation of child abuse became evident.”

“I have never heard Pope Francis refer to this so-called great adviser of his pontificate for appointments in America, although he does not hide the trust he accords to some prelates,” he continues. “I sense that these are not in your preferences, nor in those of friends who support your interpretation of the facts.”

Ouellet continues: “I find it aberrant that you take advantage of the difficult scandal of sexual abuse in the United States to inflict an unheard of and undeserved blow on the moral authority of your Superior, the Supreme Pontiff.”

The cardinal concludes his letter by exhorting Vigano to reconcile with the church.

“I understand how bitterness and disappointments have marked your way in service to the Holy See, but you can not conclude your priestly life in an open and scandalous rebellion that inflicts a very painful wound,” Ouellet tells the archbishop.

“Come out of hiding, repent of your revolt and return to better feelings towards the Holy Father,” the cardinal urges.

“How can you celebrate the Holy Eucharist and pronounce his name in the canon of the Mass?” he asks. “How can you pray the holy Rosary … condemning him whom the Lord protects and accompanies every day in his heavy and courageous ministry?”

“In response to your unjust and unjustified attack on the facts, dear Vigano, I conclude therefore that the accusation is a political frame job lacking a real foundation,” Ouellet ends.

“I reiterate that this profoundly wounds the communion of the church,” he states. “May God wish that this injustice be quickly repaired and that Pope Francis may continue to known for that which he is: a distinguished pastor, a compassionate and steadfast father, a charismatic prophet for the church and the world.”

Pope responds to Young People: Coherence and Concreteness are the keywords

Pope Angelus: The beauty of marriage