Pope responds to Young People: Coherence and Concreteness are the keywords 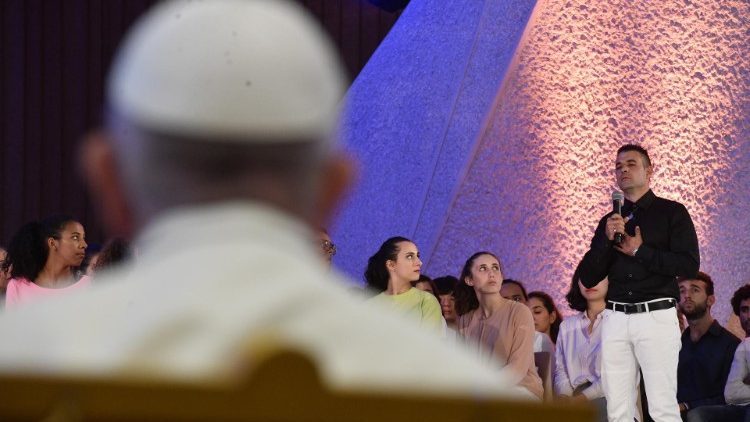 Pope Francis may have responded off the cuff to the questions posed by young people at the Youth event, held in the Vatican on Saturday evening, but he delegated more complete answers to the Synod Fathers themselves. “Here are the written questions”, said the Pope, “and the Synod Fathers will give the answers”.  “Because if I give the answers here”, he continued, “I would have to cancel the Synod. The answers must come from everyone, from our reflection, our discussion and, above all, they must be answers made without fear”.

Pope Francis then proceeded to provide his own brief reflections by offering some basic principles and “something useful” in response to the young people. The first of these was to encourage them to be “young people on the way”, young people “who look at horizons, not at the mirror”. We don’t find ourselves by looking in the mirror, he continued. We find ourselves “in doing, in going in search of good, truth, beauty”.

The Pope said he was struck by the world “coherence”, used by one of the young people during his testimony. “When you see an incoherent Church”, he said, “a Church that reads the Beatitudes to you and then falls into the most princely and scandalous clericalism, I understand. If you are a Christian, take the Beatitudes and put them into practice”. Young people too must be coherent, he continued. “This is a second principle”. Pope Francis spoke of losing a sense of what it means to have power: “true power is to serve…Power is to make people grow, to become the servant of people.”

The Pope then reminded young people that they are priceless. “You are not merchandise at auction”, he told them. “Please, don’t let yourselves be bought, don’t let yourselves be seduced, or enslaved by ideological colonization”. You are free and need to “fall in love with this freedom”, because this is what Jesus offers. But Pope Francis also addressed the issue of “interconnection with the digital world”. While recognizing that is fast and effective, he went on to warn his young audience about the effects of becoming too dependent on it at the risk of sacrificing relationships. “You will end up like a family at the table, at lunch or dinner, each one with a mobile phone, talking to the others, or with each other, with a mobile phone, without a concrete, real relationship”.

The value of concreteness

This brought the Pope to the theme of being concrete: “Every road that you will take to be sure, must be concrete”, he said. “If the media, or using the web takes you away from concreteness, it makes you liquid. Cut it out. Because if there is no concreteness there will be no future for you”. Pope Francis gave the practical example of the concreteness of welcoming others. He was quoting from one of the young people’s questions when he asked how can we “overcome the increasingly widespread mentality that sees in the foreigner, in the stranger, in the migrant, a danger, something evil, an enemy?”

The Pope distinguished between “populism” and “popular”, saying that “popular is the culture of the people, the culture of each of your peoples that is expressed in art, in culture, in the science of the people, in celebration”. Populism, he said “is the opposite: it is the closure of this model. We are closed, we are alone. And when we are closed we can’t go on”. Love, he concluded, “is the word that opens all doors”.

The roots of concreteness

The Pope returned to the theme of concreteness in his closing remarks, encouraging young people to spend time with, and to listen to, the elderly and to their grandparents: “They are the roots, the roots of your concreteness, the roots of your growing, blooming and bearing fruit”, he said. “Remember, if the tree is alone, it will not bear fruit. Everything that the tree has in bloom comes from what is buried in the ground”.

The Holy Father concluded by repeating his initial remarks concerning the fact that these responses were to be considered simply as “orientations”. The answers, he said, indicating the Synod Fathers, “are up to them!”

Pope says Church depends on youth for its missionary dynamism