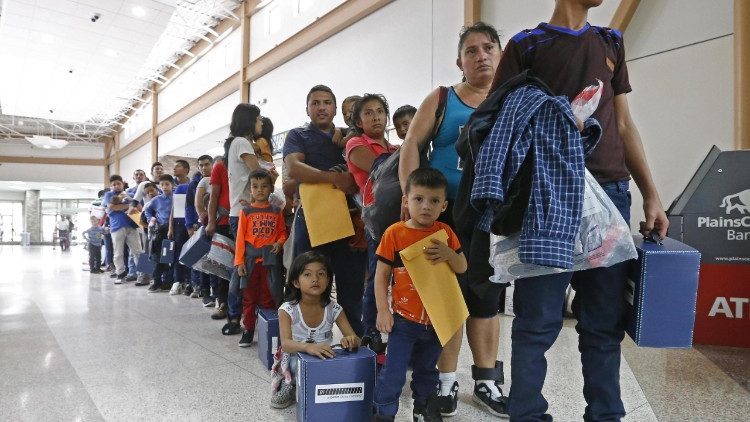 The US Bishops Conference (USCCB) released a statement on Tuesday, the day after after US Secretary of State, Mike Pompeo, announced cuts in the number of refugees it would accept in 2019.

Lives are in danger

Bishop Joe Vàsquez, Chair of the USCCB’s Committee on Migration called the announcement “deeply disturbing”. Capping the number of refugees to 30,000 would leave “many human lives in danger”, he said. According to Vàsquez, many people “fleeing persecution, at a time of unprecedented global humanitarian need” will be left unprotected. That, he said, is a contradiction of who the US is as a nation.

Contradicts who the US is

The contradiction lies with the fact that the US has long offered asylum to those “fleeing violence, torture, or religious persecution”. In fact, he calls this “a cornerstone of our history”, whereas, “closing our doors…is not who we are as a people”. Another contradiction he points out is that the vast resources in the US makes “us capable of securely welcoming those fleeing harm”.

Bishop Vàsquez concluded his statement asking Congress to “engage in the formal consultation process with the Administration that is required by law”. The criteria he asks the Congress to propose to the US Government in setting a refugee admission level are: “local community response and support of refugees, global refugee protection needs, and our long history of compassionately welcoming refugees”.

On Monday, Mike Pompeo, the US Secretary of State, announced a decrease in the number of refugees that the US would allow to enter the country in 2019. Only 30,000 will be allowed to enter. Although the ceiling for 2018 is 45,000, the US will most likely actually own admit 22,000 this year.

Although the numbers of refugees being admitted is declining, Mr Pompeo insists that the US is “the most generous nation in the world when it comes to protection-based immigration”. In addition to 30,000 refugees, the US foresees “processing more than 280,000 asylum seekers”, Mr Pompeo added.

His announcement, however, sparked criticism from many sectors. Jennifer Quigly of Human Rights First said that the policy “is a shameful abdication of our humanity in the face of the worse refugee crisis in history”. “Cruel and shortsighted” are the words used by Democratic Sentator, Bob Menendez.

Card. Turkson: ‘How do we welcome the least?’

Lithuania hopes Pope Francis will bring hope for the future