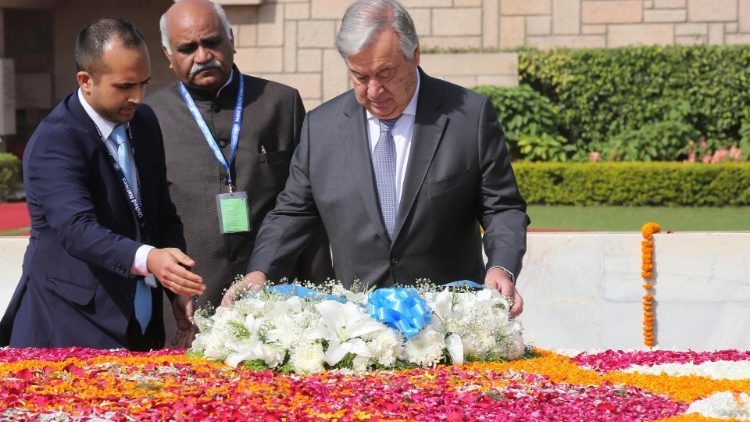 United Nations Secretary-General Antonio Guterres has called on the world to follow the “enduring vision and wisdom of Mahatma Gandhi” whose non-violent methods, he said, are a path to peace and development.

In a message for the International Day of Non-Violence on Tuesday, marking the birthday of the charismatic leader of the Indian independence movement and pioneer of the philosophy and strategy of non-violence, the UN chief said that “at a time of protracted conflicts and complex challenges, Gandhi’s philosophy of non-violence remains an inspiration.”

“At the United Nations,” Guterres said, “a world free of violence – and the resolution of differences through non-violent means – is at the core of our work.”

Guterres has timed an official visit to India, October 1-4, to participate in several events to mark the 150th anniversary of Gandhi.  On Tuesday, he visited the Gandhi memorial at Raj Ghat in Delhi, where he laid a floral wreath in his honour.

Guterres recalled Gandhi’s commitment to social justice. with inequality on the rise. He said it was important for a fairer globalization process to take root, based on human dignity, at a time when the world is “striving to achieve the Sustainable Development Goals, ensure gender equality and leave no one behind.”

The Charter of the United Nations, said the Secretary-General, with its call in Chapter VI for the use, “first of all”, of negotiation, mediation, arbitration, judicial settlement and other peaceful ways to address threats to peace, echoes the spirit of Gandhi’s statement that “non-violence is the greatest force at the disposal of mankind.”

Noting that Gandhi proved that non-violence can change history, Guterres called on the world to be inspired by Gandhi’s “courage and conviction as we continue our work to advance peace, sustainable development and human rights for all of the peoples of the world.”