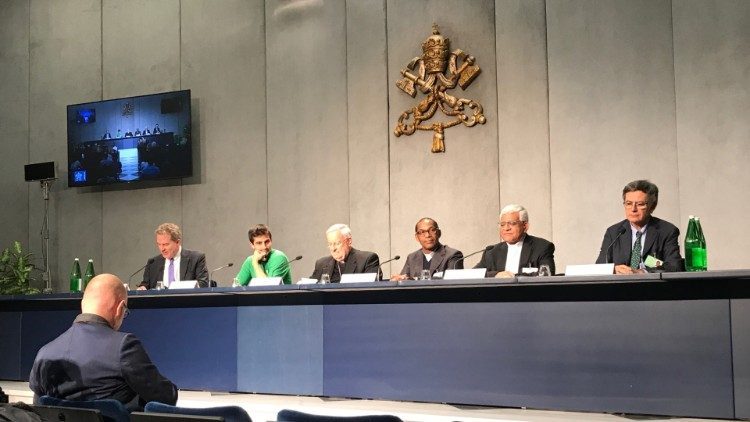 The Synod Fathers and auditors did a 6 kilometer pilgrimage today from Monte Mario to St Peter’s. At St Peter’s, Archbishop Rino Fisichella, President of the Pontifical Council for the Promotion of the New Evangelisation, presided at Mass.  The Holy Father was also present.

An auditor from Brazil, Mr Lucas Barboza Galhardo, said that there was great openness and joy at the Synod. He said that he feels that young people have been heard and he believes that the process should be continued after the Synod.

All those present at the press briefing spoke about the sexual abuse of minors.

Archbishop Vidarte said that what happened is painful because damage was not only done to the bodies of children but also to their souls. The Archbishop said that it is good to remember that this is not the entire Church but done by some in the Church. The Church, he said, needs to be reborn and move away from this situation.

Cardinal Furtado said that this is a huge scandal in the Church but that it is also a problem for all of society. He said that all, the Church and society, must cooperate with the latest in science to eradicate this problem. We cannot accept this in the Church, he said, but we must also help society rid itself of this problem.

Cardinal Gualtiero Bassetti from Italy said abuse has hurt the whole body of Christ; the whole Church has suffered because of what has happened. He said that the Church needs to take responsibility for this which includes cooperating with civil authorities and the judiciary.

The Cardinal went on to say that prevention is key and that seminaries need to use all the instruments of the human sciences to assess candidates for priesthood and religious life. It is not enough to report on what has happened, the Church must now adopt all possible means to prevent this. He said that the Italian bishops will be meeting in November for a full day to discuss this issue in depth

UN: half of Yemen’s population in pre-famine conditions