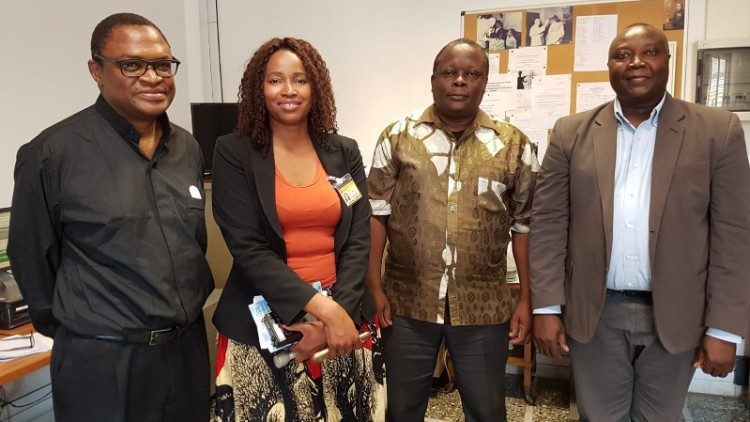 The young presenter, who moved to South Africa from Mozambique at the age of 12 says she is passionate about women’s issues and also tries to reach out to Portuguese speakers in and around Johannesburg.

Her daily “Holy Hour” programme encourages listeners to put God first in whatever they do.

Radio Veritas is the only Catholic radio station in South Africa. Its programmes are broadcast on 576AM and DSTV Audio Channel 870. It also live streams audio on www.radioveritas.co.za.

The radio station based in South Africa’s largest city of Johannesburg in Gauteng Province has been on air since 2000. It serves both the Church and the community with its numerous programmes.

Looking at current affairs from a Catholic viewpoint

Sheila Pires is the host of “Catholic View” a current affairs programme broadcast at 6.30 pm from Tuesday to Friday every week.

She says to produce the programme that looks at current affairs in Africa, from the perspective of the Catholic Church, she speaks to priests, men and women religious, the laity and also to Catholic leaders throughout Africa.

Every Thursday evening, Sheila hosts the “Focus on Women” programme, a feature that “explores the role of women not just in Church but also in society. The programme also looks at gender equality and promotes women who are making a change in their communities.

Asked about the common problems women share in her show, she says a recurring issue is that of the lack of leadership roles for women. She says women complain of not having a say in the governance of the Church.

Young people need their space in the Church

Sheila does not shy away from raising contemporary and controversial issues related to women, youth and African politics in her programmes on Radio Veritas. Asked about the role of young people in the Church vis-à-vis the Synod on Young People, she says, the young members of the Church, especially the Catholic young women from the IMBISA regional bishops’ conference need to be given ample space to realise their aspirations.

She says young people in the region face many challenges, including unemployment, underemployment, human trafficking and gender inequality.

Sheila, who is originally from Mozambique, is also the host of a programme in Portuguese on Radio Vertas called “Fala Bonito” which in English translates as “Speak Beautifully”. The programmes looks at the global church and current issues but from the Portuguese context.

The target audience are the many Portuguese speakers living in South Africa, especially in and around Johannesburg.

Put God First in everything you do

Every day from 12 noon to 1 pm, Sheila hosts a programme called “Holy Hour” which starts with a half-hour live broadcast of Holy Mass and then listners are allowed to phone-in during the rest of the programme to share their prayer intentions. Sheila says, “The reason why I love this show is because it is down to earth. It brings me down to earth. We complain a lot about our problems in life but when you listen to Holy Hour, you realise that our problems are minimal, that you actually don’t have problems in this world and that when you give everything to God, when you put all your worries in God’s hands, then you are free of that burden.”

Holy Hour, she continues, “reminds us that if you trust in God first and fully believe in him, you will have a beautiful and tranquil life even in the midst of so many difficulties.”

Speaking up for women

Sheila was invited to chair a roundtable discussion on Cultures and Catholicism at the Catholic Women Speak Symposium held in Rome at the beginning of October 2018.

The organization seeks to bring Catholic women’s voices into dialogue with others in the Catholic Church, with those in other churches and religious traditions, and with wider society, in order to participate in a deeper, richer understanding of the Catholic tradition and its relevance for our times.