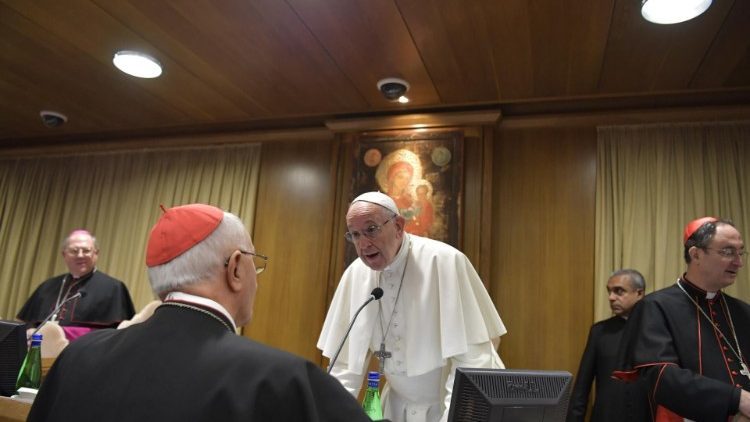 Dr Paolo Ruffini, Prefect of the Vatican Dicastery for Communications, began the daily press briefing saying that the work on the second part of the Instrumentum Laboris was complete.

He then listed many issues that the Synod assembly addressed. He mentioned issues like migration, freedom, sexual morality, the mystery of evil in the world, justice and the fight for human dignity. He also said that the fact that young people do not like hypocrisy was highlighted. He said that some ideas had been shared – things like bringing parishes together from different parts of the world so that young people can share information and learn about different contexts. He also said that there was a suggestion that parish structures are changed so that young people find a home in their local parish.

Archbishop Jaime Spengler, O.F.M., of Brazil, says that the Synod has spoken about many things but not addressed the issue of drugs sufficiently. This issue, in Brazil, affects many people and families. He said that although the comparison was poor because population numbers are so different, it is interesting to note that in Brazil more people are killed by drugs than by the war in Syria. He said that young people are tragic victims of the drug trade.

The Archbishop said that sectors in society want to liberalise some kinds of drugs. This, he said, is like promoting addiction and yet the state and society are not committed to helping young addicts. He said that many young addicts suffer and find it very difficult to turn back.

He said that the Church does extraordinary work and tries to create opportunities to help young people turn back. He urged that the Synod not forget the cruel reality of drugs. He said that drug dealers bring death and that it is hard to find a family that doesn’t face this problem. There is a massacre in the suburbs of the larger cities in Brazil every weekend that cries out for justice, the Archbishop said.

His Beatitude His Eminence Cardinal Louis Raphaël I Sako, Patriarch of Babylon of the Chaldeans, head of the Synod of the Chaldean, Iraq, said that in the Instrumentum Laborismany issues are named. He laments that there is no mention of young persecuted Christians.

Addressing the question of aid to the persecuted Christians, the Cardinal said that there have been many promises but nothing has materialised. He says that the international community must help Christians stay where they are, help create work, repairs their homes and give them hope. He says that allowing countries, like Iraq, to empty is a mortal sin. If Christians continue to leave he says that they would have lost their identity and heritage. He said that Hungary has made a significant contribution to help Christians in Iraq and Syria to rebuild their homes, schools and churches.

He said that bishops and priests have great responsibilities to listen to the dreams, hopes and fears of all young people.

Cardinal Sako said that young people are afraid of commitment, to both priesthood and religious life, as well as marriage. They are afraid that commitments will fail, he said.

Synod as a school or manual

Cardinal Sako said that the Synod was like a school in which everyone learns from each other. He said that the Synod is seeking a language that speaks to youth, Often, he noted, the Church uses traditional language but a new one is needed that is relevant to youth. The Cardinal also expressed the concern that there were too few young people at the Synod, he said that he had hoped for more to be present.

The Cardinal also said that it was not the final document that was important. What is important is the spirit and hope that the Synod offers young people.

Cardinal Peter Kodwo Appiah Turkson, prefect of the Dicastery for Promoting Integral Human Development, used the image of a “manual” to describe the work of the Synod. The Synod is like a gathering in which young people, with the bishops, are composing manuals for life. He said that as young people write the manual they are guided by values like those from Catholic Social Teaching. These principles, he said, will help give them a basic orientation for their lives