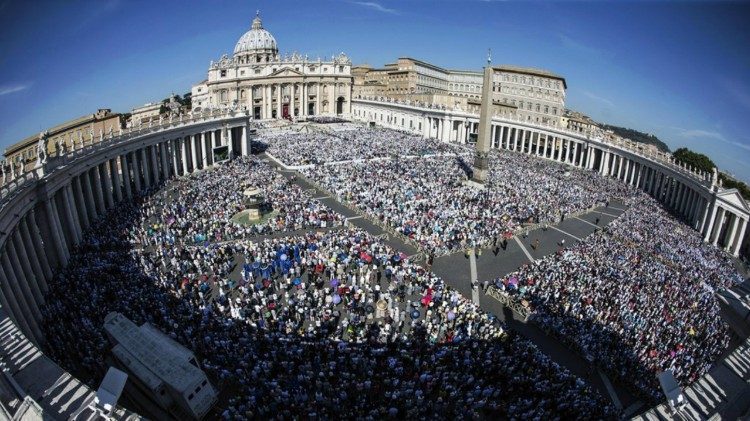 Admirers, devotees and beneficiaries of Mother Teresa of Calcutta around the world are recalling the saint, her life and her works on Tuesday, the second anniversary of her canonization by Pope Francis in Rome.   The Pope officially declared her St. Teresa of Calcutta on September 4, 2016.

The Pope had made Mother Teresa one of the major reference points of the Extraordinary Jubilee of Mercy that he declared from 8 December 2015 to 20 November 2016.  The day of her canonization, September 4, was designated as the Jubilee for Workers of Mercy and Volunteers.

After officially declaring Mother Teresa a saint at the canonization Mass, the Pope delivered a homily focusing where he focused on her works of mercy.

Speaking in Italian, the Pope said that “her mission to the urban and existential peripheriesremains for us today an eloquent witness to God’s closeness to the poorest of the poor.” “ Today,” he said, “I pass on this emblematic figure of womanhood and of consecrated life to the whole world of volunteers: may she be your model of holiness!….  The Holy Father wished the tireless worker of mercy help us increasingly to understand that our only criterion for action is gratuitous love, free from every ideology and all obligations, offered freely to everyone without distinction of language, culture, race or religion.

Born Agnes Gonxha Bojaxhiu‎ of Albanian parents on ‎August 26, 1910, in Skopje, in what ‎is ‎Macedonia today, Mother Teresa came to eastern India’s Kolkata city, formerly Calcutta, in 1929, as a missionary sister of Loreto.   Later, in what she described as a call within a call, she founded her Missionaries of Charity congregation in 1950.

Mother Teresa, who became an Indian citizen, earned 124 national as well as international honours for her works of mercy, including ‎the ‎Nobel Peace Prize in 1979.   She died on September 5, ‎‎1997 at the age of 87 and ‎St. ‎John ‎Paul II declared her Blessed in the Vatican, on October 19, 2003.  ‎

The feast of St. Teresa of Calcutta is marked on September 5, the day she died 19 years ago.  Mother Teresa has many words of wisdom that people even today draw inspiration from.  One such gem is “the Gospel in your hand”.

According to Mother Teresa, we have the words of Jesus in the 5 fingers of our hand –  “You did it to me”, which, she said, sum up the entire Gospel.

In honour of Mother Teresa, the United Nations General Assembly adopted a resolution on 17 December 2012, to designate 5 September, the day of her passing away, as the International Day of Charity to focus on the role of charity and charitable organizations and individuals in alleviating human suffering