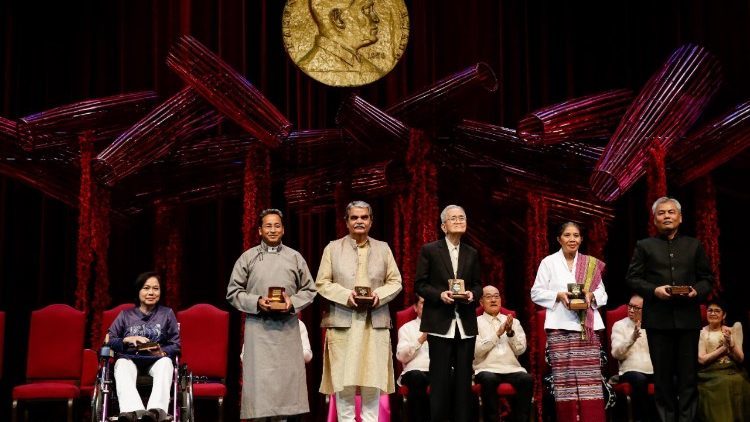 Two Indians, a Cambodian, a Filipino, a Vietnamese and an East Timorese, known for their contribution to society, were honored on Friday with this year’s Ramon Magsaysay Awards.

The prestigious award established in 1957, is regarded as Asia’s version of the Nobel Prize.  It is given annually to perpetuate former Philippine President Ramon Magsaysay’s example of integrity in governance, courageous service to the people, and pragmatic idealism within a democratic society.

Regardless of race, nationality, creed or gender, the award honours Asians who address issues of human development in the continent with courage and creativity, and in doing so have made contributions which have transformed their societies for the better.

The six Asians who were announced last month, were honoured at a formal ceremony at the Cultural Center of the Philippines in Manila.   They were each given a certificate, a medallion bearing the likeness of the late Filipino president, and a cash prize.

Youk Chhang, a Cambodian genocide survivor has been recognized for documenting the Khmer Rouge atrocities to attain justice for victims, preserve the country’s history and achieve collective healing.  According to the 57-year old Chhang, remembering the mistakes of the past is the “pathway to justice”.

The massive scope of his group’s work included collecting more than a million documents, producing digital maps of more than 23,000 mass graves and excavating remains for forensic examination. The 57-year old Cambodian is currently involved in a project to develop a museum, archives and library and a graduate programme on crimes against humanity.

Bharat Vatwani is an Indian psychiatrist who has rescued thousands of mentally ill people in the streets. An estimated 400,000 homeless people in India struggle with mental illness.  Vatwani started a mission in 1988 that by now has rescued, treated and reintegrated into their families more than 7,000 of them.

Vatwani’s “healing compassion” affirmed “the human dignity of even the most ostracized in our midst,” the award foundation said.

Sonam Wangchuk, from the Indian state of Jammu and Kashmir,  was lauded for fighting discrimination against minorities and founding a movement in 1988 that pursued educational reforms  and helped tutor poor village students so they could pass exams.

In cooperation with local administration he brought about reforms that focus on “creative, child-friendly, and activity-based” education in his state.

Maria de Lourdes Martins Cruz was recognized for leading efforts to help poor East Timorese get access to health care, education, farming and livelihood in the midst of the nation’s tumultuous transition to independence in 2001.

Vo Thi Hoang, who contracted polio when she was 2 years old, founded a non-profit group in 2005, the Disability Research and Capacity Development Center, that has helped about 15,000 people with disabilities get jobs through skills training. Her showcase project involved a motorcycle taxi service designed for the disabled.

Howard Dee of the Philippines

Filipino businessman Howard Dee was recognized for his “quietly heroic acts of service to the Filipino people,” and for pursuing social justice, peace, and progress for the poor.  He also helped to establish development organizations Philippine Business for Social Progress and Assisi Development Foundation.  He served as a government negotiator in peace talks with communist rebels in the 1990s.