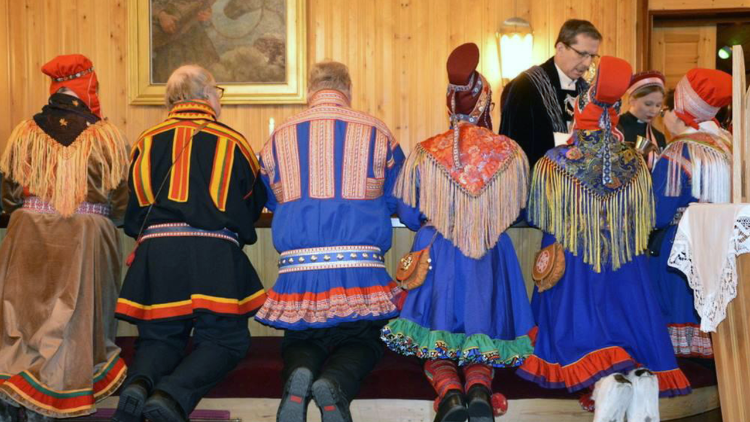 An interview with Rev. Mari Valjakka, pastor of Sámi at the Evangelical Lutheran Church of Finland, highlights the reality of Europe’s only indigenous people and their unique and precious contribution to humanity’s effort to care for Creation.

On the eve of the Week of Prayer for Christian Unity Pope Francis met with a delegation from the Evangelical Lutheran Church of Finland. He encouraged them to renew their enthusiasm for following Christ and thanked them for their engagement and work with indigenous peoples and for their commitment to care for our common home.

Rev. Mari Valjakka, pastor of Sámi at the Evangelical Lutheran Church of Finland and moderator of the WCC Indigenous Peoples Reference Group was part of the delegation. She belongs to the Skolt Sámi community, an indigenous people with a unique culture and history. A people that has also suffered discrimination and injustice.

During the audience, Pope Francis specifically referred to the Sámi, the only indigenous people living in the European Union, with a population of about 75 thousand whose livelihoods depend mainly on reindeer herding and fishing. He invited them to work for the healing of memory, pursuing the “sincere search for truth.”

Pope Francis receives the delegation from the Lutheran Church in Finland

In an interview with Vatican News’ Benedetta Capelli, Rev. Valjakka speaks about the connection she feels with the Pope and about the ecumenical journey in Finland where Catholics are a minority and where a path of renewal and reconciliation with the indigenous people is being set in motion.

The duty to listen

“I think the protection of Creation is central to the mission of the Church, as human beings we were created in the image of God and as the image of God we are called to care for creation,” Rev. Valjakka says.

She explains that about eighty percent of the planet’s biodiversity is to be found in areas populated by indigenous peoples, “these peoples have really been custodians of their lands, so they have a centuries-old tradition with respect to that.”

She notes they have “so much wisdom” to share but very often their voice is not heard, not listened to.

“In my opinion, the mission should start from the margins, from the peripheries with the indigenous peoples, with those who are discriminated against. As Christians we have a duty to listen to these voices that are often not heard – or even silenced – because they are our brothers and sisters in Christ,” she says.

The Reverend Mari Valjakka in Finland

She speaks of how she reacted when she heard Pope Francis’ call to government leaders to defend the Amazon rainforest, and protect all the indigenous groups that live in the area: “I was really struck because I see that what happens in the Amazon does not simply stay in the Amazon, what happens in the region where I live, the Arctic region, does not simply stay there. We are all facing a climate crisis but indigenous peoples are facing it in the trenches, on the front line.”

Rev. Valjakka notes that her own region, the Arctic, is warming up much faster than anywhere else on the planet.

“So when I hear the Pope touch on these essential issues it gives me so much hope because I think the Gospel needs to be spread, and by spreading it can have a beneficial impact. We have a task to pray and also ask the Lord to show us how these indigenous peoples can communicate their wisdom to others and we need to pray that those in power, those who are world leaders, can be touched so the future can be better than yesterday,” she says.

As regards the reality of the Sámi people and her own commitment, as a woman of faith, to defend the rights of minorities, Rev. Valjakka reveals that her people have a long history of marginalization in Finland, and the history of relations between the Sami people and the local church has not always been without problems.

A woman and a member of a minority

“There has been an attempt to assimilate us into the dominant culture, there was a time when we could not use our own language or even show signs of our culture,” she says.

However, she continues, now “we have begun a process called truth and reconciliation. It is a time when Sámi people can tell their experiences, what they have suffered and start a path of reconciliation.”

She expects it to be a long and hard process but says she hopes it will provide the chance to understand each other better.

“The fact that I am a woman and that I come from a minority group within the Sámi minority itself means that I find myself, I won’t say every day but maybe every second of the day, fighting against windmills. But being here, having the opportunity to meet Pope Francis, and also being able to talk and exchange views with Catholics who work within Finland and who are also in contact with minority groups, gives me the feeling that maybe these windmills are not so strong, so powerful,” she says.

The Reverand Mari Valjakka in the Vatican

Finally, Rev. Valjakka expresses her opinion that relations between the various Christian denominations are very good in Finland.

At the same time, however, she says those relations can be further strengthened and can be opened up to other religions as well, a particularly poignant need as we hopefully leave behind the pandemic.

Pope Francis meets the delegation from the Lutheran Church in Finland