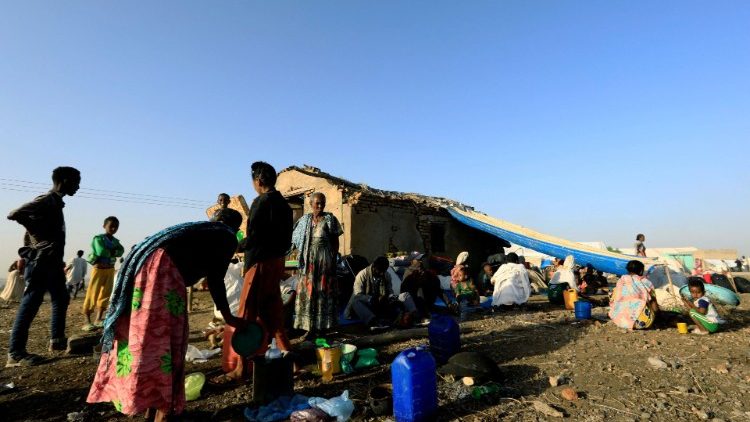 The Catholic Diocese in Ethiopia’s strife-torn Tigray region is denouncing the worsening humanitarian situation, and seeking to reach out to the suffering people amid numerous constraints.

Millions of children are suffering from severe malnutrition, many more people are starving, including internally displaced persons. Disease and death are everywhere and people are at high risk of chronic diseases and Covid-19, especially children and the elderly said the Adigrat Diocese Catholic Secretariat (ADCS).  The Catholic Eparchy or Diocese) of Adigrat of the Alexandrian Tradition covers the entire Tigray region.

The civil war began in November 2020, when forces loyal to the Tigray People’s Liberation Front (TPLF) seized military bases in Tigray. It came just three months after the central government postponed a scheduled general election, citing the Covid-19 pandemic.  When the Tigray region held its own regional elections in September 2020, the central government declared the vote unconstitutional.

Ethiopian Prime Minister Abiy Ahmed responded to the TPLF’s attacks with a military counter-offensive that has spiraled beyond Tigray, as militias and separatist groups from other regions took up arms against the central government.

The United Nations World Food Programme (WFP), said last week that because of escalating clashes in Tigray, its aid convoys have been able to reach the regional capital, Mekelle, since 14 December.

It said an estimated 9.4 million people require humanitarian food assistance. This is an increase of 2.7 million from four months ago, “the highest number yet”.

From the start of the conflict until mid-June 2021, the ADCS and the religious congregations under Adigrat Diocese have tried to save lives. However, due to numerous constraints, including security restrictions on movement and access, cash withdrawal limits and shortage of basic supplies in the market, humanitarian aid has been limited to the cities and areas around the main roads.  The situation is further aggravated by the blockade of land and air transport.

“Like other humanitarian organizations, we have not been able to continue responding to emergencies, reach people affected by war and alleviate their suffering”, ADCS director Father Abba Abraha Hagos said.  It is an unprecedented humanitarian crisis, and with each passing hour and day, hundreds of innocent victims are dying, he told the Vatican’s Fides news agency.

The ongoing war, accompanied by indiscriminate airstrikes with fighters, helicopters and drones, has caused an unprecedented crisis.  The ADCS said innocent civilians are facing ethnic-based attacks and massacres, rampant gender-based violence, destruction of homes and displacement of millions of people.  As a result, the economy and social infrastructure have been devastated; institutions and cultural and religious heritages have been destroyed and millions are terrified and traumatized.

Father Hagos said, “The entire population has been deprived of all the fundamental rights of every human being: the right to live with dignity, the right to security, education, food, water, to receive humanitarian assistance, etc.”  “The daily reality of the country is of suffering, death, lack of medicines for preventable diseases. Any further delay will end in irreparable disaster for human lives and the social fabric of an entire generation.”

The ADCS said that Adigrat Diocese is immersed in an extremely alarming crisis that needs an urgent response from partners, other humanitarian organizations and the international community.

Earlier in November, Bishop Tesfaselassie Medhin of Adigrat called for an immediate end to the central government’s aerial bombardment of Tigray.  Denouncing it as a war of ethnic cleansing, he said the bombardment was destroying lives, property, civilians and institutions in the region.  He reiterated the Catholic Church’s call for a peaceful solution to the conflict.

A recent initiative by the African Union Commission (AUC) has raised a glimmer of hope for peace in Ethiopia.  Former Nigerian president Olusengun Obasanjo, now the African Union High Representative for the Horn of Africa, recently visited the Ethiopian capital, Addis Ababa and the Tigrayan capital Mekelle.  After speaking with Obasanjo, UN Secretary-General Antonio Guterres on Wednesday said he was “delighted” to learn that “a demonstrable effort to make peace” in Ethiopia is finally underway.  He said Obasanjo “expressed optimism that there is now a real opportunity for a political and diplomatic resolution of the conflict.”

Caritas Canada on partnering with Caritas Zambia to study the impact of the extractive industry.