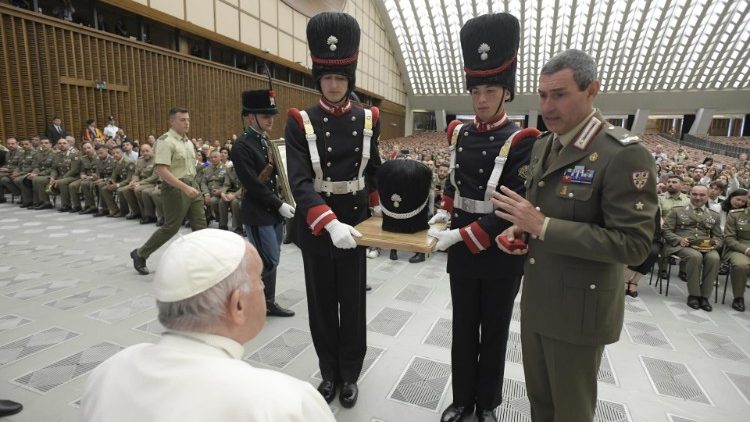 Pope Francis greeted and thanked members of the “Grenadiers of Sardinia” brigade finishing their time of service in Rome for keeping the streets safe and secure, while offering and inspiring solidarity.

The Grenadiers of Sardinia are finishing their time of service in Rome. Pope Francis thanked them for making the streets of Rome “safer, more secure and more livable.” He noted their dedication in guarding institutional and diplomatic sites, airports, train and subway stations, as well as cultural and religious sites. This daily presence not only provides security, but fosters a sense of tranquility, he said.

The Pope offered a special thanks for the “discreet and important service” offered in particular to the Vatican, together with the nation’s Police Force, in assuring public order and contributing to the peaceful conduct of events and celebrations throughout the year that draw pilgrims and tourists from around the globe. He praised them all for their patience, helpful outreach, personal sacrifice and sense of duty they have offered for what can be exhausting, but much appreciated service by the community.

People place their trust in you, the Pope observed, and in living up to that calling he encouraged them in both their work and personal lives to be “promoters of solidarity, helping people to be good citizens.” He also pointed out that their professionalism and sense of responsibility help express and fortify a sense of belonging to citizens, the state and the common good.

“In the fulfillment of your mission, may you always be aware that every person is loved by God, is his creature and as such deserves respect. May the Lord’s grace nourish day-by-day the spirit with which you devote yourselves to your work, helping you carry it out with extra care and dedication.”

The Pope also recalled how the presence of the Italian Army in various parts of the city offers a sense of security, a sign of closeness to the people, and important cooperation in preventing and combating crime, as well as extra support for emergency situations. Various groups and regiments have alternated in their participation to assure a safer environment, as the Grenadiers of Sardinia have contributed in their own way, he added, hoping they had a positive experience both for personal and professional growth.

In conclusion, the Pope said he accompanies them in their life journey with his affection and prayers and entrusts them to the maternal protection of Our Lady to whom they can always turn with confidence, especially in moments of weariness and difficulty. He added that Blessed Mother will know how to present to her Son Jesus the needs and expectations of each, as she is mother, and like all mothers she knows how to guard, safeguard, and help.