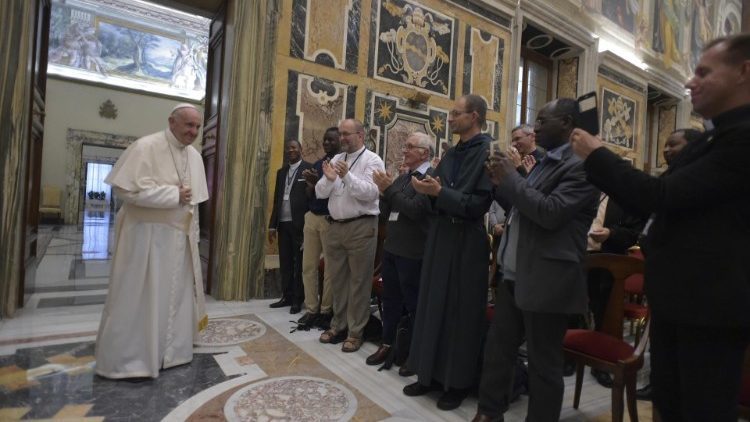 Pope Francis welcomed to the Vatican about 100 priests from the diocese of Crétiel, near Paris who are on pilgrimage to Rome.

In his address, the Holy Father thanked God for their vocations to be “faithful ministers of the mysteries of Christ.” He noted that today the Church is “battered by opposing and violent winds, especially because of the grave sins committed by some of its members.” But, he said, it is important to remember the “humble fidelity” of the great majority of those called to serve the Church as priests.

The Pope said that those who answer the call to ordained ministry are not called to be “superheroes,” but to serve others after the pattern established by Jesus, who was wounded, died, and rose again – because, he said, “our mission is to bear witness to the strength of the Resurrection in the wounds of this world.”

Pope Francis said that, in their work of re-organizing the diocese, the priests of Crétiel should be attentive to the wounds of the Church, not in order to lament them, but to bring them to Jesus. Only He can heal us, the Pope said, allowing us to begin again in Him and with Him; and only through Him can we find “concrete means to propose His life to all.”

Speaking about the need for vocations, Pope Francis said that where there is life and zeal, and a desire to bring Christ to others, genuine vocations will spring up. He encouraged them to share the example of their own lives, especially personal prayer, listening to the Word of God, celebrating the Sacraments, and service to others. He encouraged them to foster and develop community life, so that the value of priestly life can be recognized as a service of truly missionary communion.

“Allow yourselves to be transformed and renewed by the Spirit,” Pope Francis said in conclusion, “in order to recognize the word the Lord wants to offer the world through your life and your ministry.”