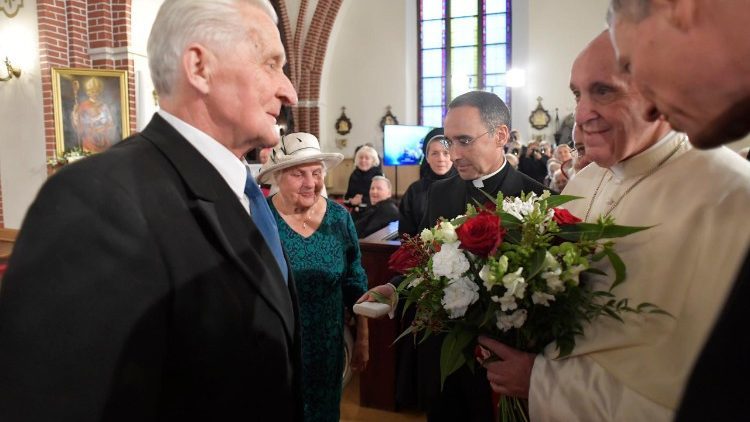 Pope Francis recalled that many of those present were victims of “the horror of the war, then political repression, persecution and exile”. He lauded them, as he said they “remained steadfast” and “persevered their faith”.

“Neither the Nazi regime nor the Soviet regime could extinguish the faith in your hearts” said Pope Francis.

These occurrences, said Pope Francis, “did not stop some of you from becoming priests, religious sisters, catechists or from serving the Church in other ways that put your lives at risk”. He commended them, assuring them they “fought the good fight”.

The Pope said that this “constancy in faith overcomes trials”, and urged them to be consistent, saying that their work, “however perfect in those days, must also tend to perfection in today’s new situations.”. He acknowledged that those who “devoted body and soul… to winning freedom” for their native land now often find themselves “cast aside”.

This brought to light the fact that often today’s free men and women “subject the elderly to solitude, abandonment, lack of assistance, social exclusion and even poverty” making those who fought to gain those rights “honoured in words but forgotten in daily life”

He urged them not to lose hope, reminding them that “Saint James tells you nonetheless to persevere, not to give up”. He told them to continue applying two forms of patience: “patient endurance and patient expectation”. “In this way”, said Pope Francis, “you will continue to build your people”.

Perseverance in the face of adversity

Pope Francis reminded them that because of their length of years they are “living witnesses of perseverance in the face of adversity”, and that this is a gift to “remind younger generations that the care and protection of those who have gone before us is loved and valued by God”.

Pope Francis also reminded the elderly that they are the “roots of young shoots that need to flourish and bear fruits”. In going back to his own roots, he concluded quoting a sonnet by the Argentine poet Bernàrdez: “’all the blossoms on the tree draw life from what lies buried underneath’”.

Pope: Motherhood of Latvia helps families and looks to future

Pope Francis: Visit to the Freedom Monument in Riga, Latvia