Pope: Motherhood of Latvia helps families and looks to future 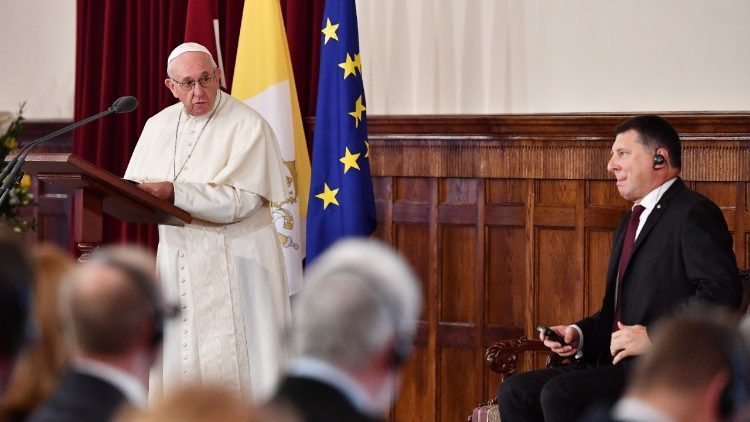 In his words to Authorities, Civil Society and the Diplomatic Corps gathered at the Presidential Palace in Riga on Monday morning, the Pope began by recalling Latvia’s turbulent past and its vibrant present.

Latvia past and present

He said that both the entire country and its capital Riga, had “known difficult social, political, economic and spiritual struggles,” which he noted were, “the fruit of past divisions and conflicts, yet today, he added, Latvia was now “one of the principal cultural, political and shipping centres of the region.”“Latvia…, has turned its sorrows and pain into singing and dancing, he said, and has sought to become a place of dialogue and encounter, of a coexistence that is peaceful and looks to the future.”

This year Latvia is celebrating the centenary of its independence, and with that in mind, Pope Francis commented, “you know all too well the price of that freedom, which you have had to win over and over again.” It is a freedom, he continued, made possible thanks to your roots that, as writer Zenta Maurina, “who inspired so many of you, observed, “are in heaven”.”
He told those assembled, that the “spiritual capacity to see more deeply, as expressed in small and daily gestures of solidarity, compassion and mutual assistance, has sustained you and in turn has given you the creativity needed to generate new social processes, despite the currents of reductionism and exclusion that always threaten the fabric of society.”

During his address, the Pope praised the work of the Catholic Church in the country with regard to its engagement with other Christian churches. He stressed that, this “cooperation shows that it is possible to build communion within differences.” He also underlined the importance of solidarity as a way to overcoming division and building lasting unity. To work for liberty, said Pope Francis, “is to commit oneself to the integral and integrating development of individuals and the community. If today we can celebrate, it is due to all those who blazed trails and opened a door to the future…” and bequeathed to you that same responsibility.”

The theme of this visit to Latvia is, “Show Thyself a Mother” in honour of the Virgin Mary. Focusing on this theme, the Pontiff spoke of the “motherhood of Latvia”, which, he said, was manifested in her ability to promote truly effective strategies centred on the family, and “to generate employment opportunities, so that no one will need to be uprooted in order to build a future.”

The Pope concluded, in order to be creative in the present and hopeful for the future, it was important to look to the sacrifice of past generations and imitate their example