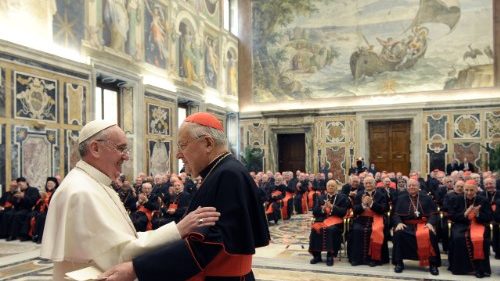 Pope Francis offers his condolences for the death of Italian Cardinal Angelo Sodano, who served as the Vatican Secretary of State for 15 years and who died on Friday at the age of 94.

Cardinal Angelo Sodano, who served as Secretary of State under Pope St. John Paul II and Pope Benedict XVI, and as Dean emeritus of the College of Cardinals, passed away on Friday evening in Rome at the age of 94. He had been hospitalized for pneumonia on May 9 at the Columbus Hospital-Gemelli after testing positive to Covid-19.

The Italian cardinal was at the helm of the Vatican Secretariat of State from 1991 to 2006 and was Dean of the College of Cardinals from 2005 to 2019.

An esteemed man of the Church

Pope Francis sent his condolences to Cardinal Sodano’s sister Maria in a telegram on Saturday, in which he expressed gratitude to the Lord “for the gift of this esteemed man of the Church, who lived his priesthood with generosity”, recalling his “attentive work” in Vatican diplomacy.

“In the Pontifical Representations of Ecuador, Uruguay and Chile, he zealously dedicated himself to the good of those peoples, promoting dialogue and reconciliation. In the Roman Curia he carried out his mission with exemplary dedication”, the telegram reads. Pope Francis also recalled his period of service as Dean of the College of Cardinals.

“In every task he proved to be a ecclesially disciplined man, a lovely shepherd, animated by the desire to spread the yeast of the Gospel everywhere.”

Concluding, Pope Francis raised prayers of suffrage for the late Cardinal’s eternal rest, while expressing closeness to his family and the community of Asti where he came from.

The second of six children, Cardinal Sodano was born in Isola d’Asti, in the Italian Northern region of Piedmont, on 23 November 1927. His parents, Giovanni and Delfina Sodano, hailed from a rural family, which made a significant contribution to the life of the Church and the State. His father was also a member of the Italian Parliament from 1948 to 1963, for three terms.

He was ordained a priesti in 1950 and spent his first years of priesthood in Asti, where he taught Dogmatic Theology and and ministered to students.

In 1959, he was called by Cardinal Angelo dell’Acqua, at the time Substitute of the Secretariat of State, to serve in the Holy See.

He attended the courses of the Pontifical Ecclesiastical Academy, then he was assigned to the Apostolic Nunciatures in Ecuador, Uruguay and Chile, as Nunciature secretary.

In 1968, he returned to Rome where, for a decade, he served at the Council for Public Affairs of the Church. As a Member of the Missions of the Holy See he visited Romania, Hungary and East Germany.

On 30 November 1977, Pope St. Paul VI appointed him Titular Archbishop of Nova di Cesare and Apostolic Nuncio to Chile. A few weeks later, on 15 January, 1978, he received the episcopal ordination from Cardinal Antonio Samorè in the Collegiate Church of San Secondo in Asti.

He worked in Chile for ten years.  There he visited almost all the dioceses and cooperated in the successful conclusion of the pontifical mediation between Chile and Argentina in the Beagle Channel dispute.

In 1988, Saint John Paul II called him to replace Cardinal Achille Silvestini in the office of Secretary of the then Council for Public Affairs of the Church. A year later, when the Apostolic Constitution ‘Pastor Bonus’ came into force, Sodano assumed the title of Secretary for Relations with States, dedicating himself in particular to the Pontifical Commission for Russia, of which he was president.

He represented the Holy See in various international gatherings, including  the meetings of the Foreign Ministers of the Conference on Security and Cooperation in Europe.

In December 1990, he assumed the office of pro-Secretary of State and became  Secretary of State on 29 June 1991, one day after being created cardinal. In 2002, he was elected Vice-dean of the College of Cardinals. In 1991, he was assigned the titular Church of Santa Maria Nuova, in commendam; in 1994 that of the  Suburbicarian Church of Albano,  and in 2005 the Suburbicarian Church of Ostia.

Dean of the College of Cardinals

Cardinal Sodano participated in the Conclave of 2005 which elected Benedict XVI, who confirmed him as Secretary of State and approved his election as Dean of the College of Cardinals, a position which up until that moment had been held by Cardinal Joseph Ratzinger himself.

The College of Cardinals after Cardinal Sodano’s death

Following Cardinal Sodano’s death, the College of Cardinals currently consists of 208 Cardinals, of whom 117 are electors and 91 are non-electors.

Pope to Mongolian Buddhists: Humanity must renounce all forms of violence