Pope to Mongolian Buddhists: Humanity must renounce all forms of violence 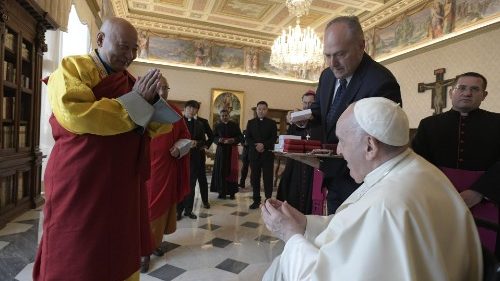 Pope Francis greets a Buddhist delegation from Mongolia visiting the Vatican, and calls for interreligious dialogue to help humanity embrace nonviolence in every aspect of life.

As the Holy See and Mongolia mark the 30th anniversary of formal diplomatic relations, a delegation of Buddhist leaders from the East Asian nation met with Pope Francis on Saturday.

The group was accompanied by Bishop Giorgio Marengo, the Apostolic Prefect of Ulaanbaatar.

Pope Francis offered the delegation a “warm and respectful welcome”, and praised their desire to build a peaceful society through mutual understanding with the Catholic Church.

“Peace is the ardent yearning of humanity today. Consequently, there is an urgent need, through dialogue at all levels, to promote a culture of peace and nonviolence. This dialogue must invite all people to reject violence in every form, including violence done to the environment.”

At the same time, the Pope lamented that some people still seek to employ religion to justify violence and hatred.

Jesus and Buddha: men of peace

Pope Francis reflected on the teachings of Jesus and the Buddha, saying both men were “peacemakers and promoters of nonviolence.”

Jesus, he said, taught His disciples to love their enemies and lived nonviolence to the point of death on the cross, “whereby He became our peace and put an end to hostility.”

Gautama Buddha, a spiritual teacher of ancient India who lived during the latter half of the first millennium BC, founded his teaching on the core principle of nonviolence and peace.

The Pope noted that the Buddha encouraged others to go beyond the categories of victory and defeat, and to discard both in the desire for self-mastery, instead of seeking to conquer others.

“In a world ravaged by conflicts and wars, we, as religious leaders deeply rooted in our respective religious teachings, have a duty to awaken in humanity the firm resolve to renounce violence and to build a culture of peace.”

Path of religious freedom and friendship

As the Church marks 30 years of its formal presence in Mongolia, the Pope admitted that few Catholics live in Mongolia—around 1,200 native Mongolian Catholics, with 6 churches, 33 priests, and 44 religious sisters—but said they are “fully committed to fostering a culture of encounter.”

Pope Francis thus called on Mongolian Buddhists and Catholics to “strengthen our friendship for the benefit of everyone.”

He expressed his hope that Mongolia’s long tradition of peaceful interreligious coexistence might lead to the “effective implementation of religious freedom and the promotion of joint initiatives for the common good.”

“Your presence here today is itself a sign of hope,” he told the Buddhist delegates. “With these sentiments, I encourage you to persevere in your fraternal dialogue and your good relations with the Catholic Church in your country, for the sake of peace and harmony.”

Life Monument intended to reveal beauty and sacredness of life