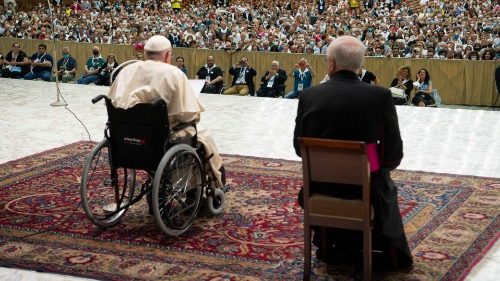 Pope Francis meets members of ‘Cursillos of Christianity’ in Italy, and encourages them to promote communion in the Church and to continue their mission of evangelizing society.

Moving towards communion, and mission: Pope Francis indicated these two “directions” to the Cursillos de Cristianidad of Italy, as he addressed some 2,400 members in the Paul VI Audience on Saturday on the occasion of their 7th national gathering, called ‘Ultreya’.

The Cursillos de Cristianidad is an international lay movement founded in 1944 in Spain, by a group of laymen, aimed at teaching men and women how to become effective Christian leaders in their neighbourhoods, parishes, work situations, and other places where people live. The group forms Christians through spiritual formation courses (cursillos), in which they are invited to build a closer relationship with Christ and to a deeper experience of Christian community. It was officially recognized by Pope St. Paul VI, who designated the Cursillos as a renewal movement of the Church. The movement is now present in many countries across the world, including the United States.

Referring to the ancient greeting, ‘ultreya’, with which Spanish pilgrims exhorted each other to go “further”, to “go beyond”, Pope Francis underscored that “to go towards communion is to go beyond oneself and beyond one’s own group to form community and grow in the Church, which, he added, is always “a body and never a grouping of separate and divided parts.”

“Never isolate yourself, and never lock yourself up! Always preserve and increase the vital links with the places of communion in which we live.”

He therefore encouraged the Cursillos, “to build community” with other groups, at a regional level, within the movement of the Cursillos, and with the Church as a whole.

“The great challenge is to maintain a spirit of charity and unity that is based on the spiritual heritage accepted by all, lived out and shared by everybody, understood by and entrusted to all,” the Pope said.

The second direction indicated by Pope Francis was that of mission.

“You have a particular charism, which has led you to rediscover and to be able to announce in a simple and direct way the essential of the Christian experience, that is, the love of God for every man and woman.”

He therefore encouraged the Cursillos to let themelves be animated by this charism, so as “to experience the joy of evangelizing, in all areas of life, private and public”, also reaching out to those who are far away from the Church.

Being on the move

Reflecting further on “going beyond”, Pope Francis finally asked the Cursillos to be always on the move for “internal unity and to evangelize”, noting that this should also apply to people in leading positions in the movement.

Speaking off-the-cuff, the Pope emphasized, in this regard, the importance of leadership renewal.  “Everyone is good, but no one is indispensable. No earthly authority is eternal,” he said.

Angola: Our liturgies must invite people to want to participate.