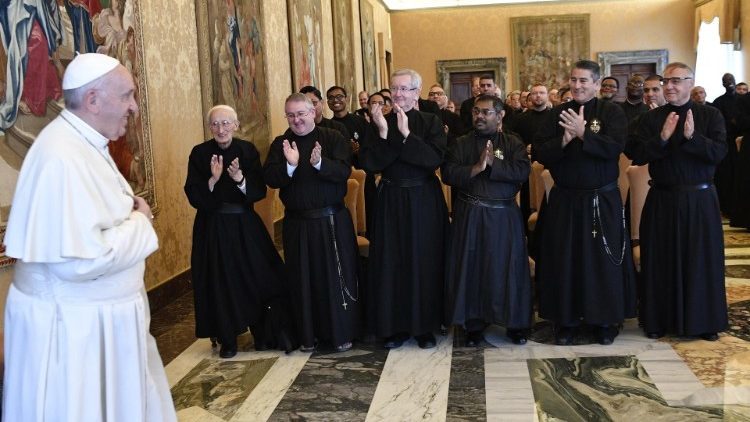 With their theme being “Renewing our mission: gratitude, prophecy and hope”, Pope Francis began his address by telling them that these three words “express the spirit with which you wish to stimulate your Congregation towards a renewal in your mission”.

The Pope spoke to the participants about their founder, St Paul of the Cross, whom he said “wanted your communities to be schools of prayer, in which to experience God”.

“At the heart of your life and mission is the Passion of Jesus”, the Pope continued. “I encourage you to be ministers of spiritual healing and of reconciliation” which, he said, “are so necessary in today’s world”. Pope Francis said that “the Church needs ministers who speak with tenderness, listen without condemning and welcome with mercy”. He recognised that the Passionists’ closeness to people “traditionally expressed through parish mission, spiritual direction and the Sacrament of Reconciliation” is a “precious witness”.

Pope Francis continued saying that the Church needs to “go into the peripheries”, both geographically and existentially speaking. He said that the Passionists’ “commitment to welcoming new frontiers in their mission” does not only help them to carry forward the Gospel, but to “face the new challenges of our times, such as migration, secularism and the digital world”. This, said the Pope, means “being present in situations in which people feel God’s absence” and trying to “be close to those who, in whatever shape or form, are suffering”.

The Pope went on to say that “in this era of changes, which is more of a change of era”, Passionists are called to look out for the presence of the Holy Spirit, “reading the signs of the times”. “New situations require new answers”, said the Pope. And in this Saint Paul of the Cross was very “creative” in responding to the needs of his time, “recognizing – as the Rule states – that ‘the love of God is very ingenious….’ (XVI)”.

Pope Francis concluded saying that “the strength and simplicity of your message, that is the love of God revealed on the Cross, can still speak to today’s society, which has learnt to no longer trust mere words, or let itself be convinced only by facts”. He explained that the Passion of Jesus can be a “source of hope and courage” for young people seeking God, and that this Passion can teach them that “each and every one of them is personally loved, forever.”