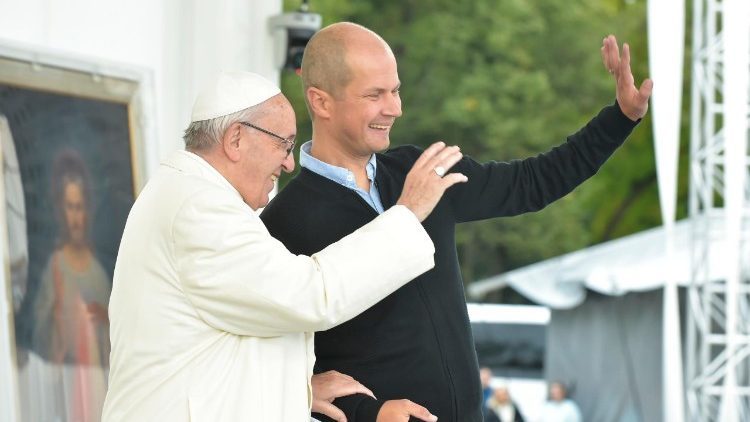 “Your lives are not a piece of theatre; they are real and concrete”. Those were the words of Pope Francis on Saturday to young people gathered in Cathedral Square in the Lithuanian capital Vilnius. He explained to them that, “if life were a piece theatre or a video game, it would be limited to a precise time, and have a beginning and an end, when the curtain falls or one team wins the game.” But, the Pope added, “life measures time differently; it follows God’s heartbeat.”

Having heard the testimonies of two young people, Monica and Jonas, the Holy Father told the youth present, that there are times “when you think you are falling apart, fires from which you think you can never rebuild.” But, he continued, “think of all the times this Cathedral went up in flames and fell apart. Yet there were always people ready to start rebuilding; they refused to let themselves be overwhelmed by hardship: they never gave up.”
Addressing both Monica and Jonas, he said, that their hardships which included the life and death of Monica’s father and Jonas’ illness could have been devastating for them. “Yet here you are, sharing your experience, seeing it with the eyes of faith…”

We are all interconnected

Pope Francis stressed to the young people in the square the importance of community, family and friends, “don’t let the world make you believe that it is better to do everything on your own”, he said. “Don’t yield to the temptation of getting caught up in yourself, ending up selfish or superficial in the face of sorrow, difficulty or temporary success.” We are all interconnected, “networked”. Who we really are has to do with our being part of a people. Identity is not the product of a laboratory; it is not concocted in a test tube. Aim for holiness through your encounters and your fellowship with other people; be attentive to their needs.”

Referring again to the testimonies of the two young people, the Pope commended their willingness to help others which, he said, in turn gave them support and put their difficulties into perspective. “Seeing the frailty of others gives us perspective; it helps us not to go through life licking own wounds”, he commented.

During his discourse the Holy Father also noted the power of prayer and song. Embracing music, the Pope explained, was a way to open oneself to the interior life, and he added, that prayer, as well as being an experience of “spiritual warfare”, was also how “we learn to listen to the Spirit”.

Pope Francis then urged all the young people gathered, “not to be afraid to take part in the revolution to which Jesus invites us: the revolution of tenderness.” He invites us, “to step out of ourselves and to risk a face-to-face encounter with others.” “Don’t ever be afraid to put your trust in Jesus”, the Pope said, “to embrace his cause, the cause of the Gospel. Because he never jumps off the ship of our life; he is always there at life’s crossroads. Even when our lives go up in flames, he is always there to rebuild them.”