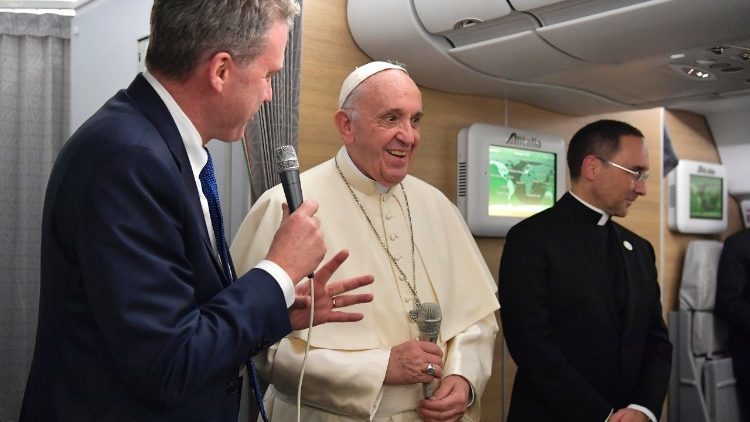 There was more than one aspect to the Pope’s Apostolic Journey to the Baltics—or rather, the experience that has just been lived quickly branches into interwoven themes upon which Pope Francis wanted to express himself, themes that are the keystones of his Magisterium. And so there was a reversal of roles during the press conference. At one point the Pope was prodding the reporters on the flight back from Talinn to ask “questions about the trip,” holding back others who were fluttering over their notebooks. Because the three questions asked by reporters from the Baltic countries were not enough for the Pope to fully express himself, he took it upon himself to immerse himself in the reality of the “three sisters,” Lithuania, Latvia, and Estonia, united in the wounds that remain etched in their collective memory. The Baltic nations are currently looking to the west, while rooted in the east, with a future that the Pope has looked forward to with hope.

An identity to be preserved
It is as if Francis were composing a mosaic. First, he insisted, as he has on practically every day of the journey, on the preservation of the respective identities of the Baltic countries, too often trampled on by cruel invaders. The identity of a nation guarded by those who yesterday used it as a shield against dictatorships, and today, by the elderly, who have a duty to transmit to the young the entire heritage of culture, faith, and art. Then, he recalled his visit to the torture chambers in the Museum in Vilnius dedicated to victims, in order to condemn the violence and the “scandal” of the legal and illegal arms trade. It is “licit” and honourable, he maintained, to defend the homeland, but States should provide themselves with a rational, and non-aggressive, defensive army. And finally, he recalled once again the principle of “prudence” with regard to immigration, which in the Baltic nations involves people coming and going; and he noted how the newly appointed heads of state recognized the value of “welcome.”

China: the “Wisdom” of the Agreement
The Holy Father then submitted to the duty of responding to current events. The Provisional Agreement with China, coming shortly after his arrival in Lithuania, is the topic that has moved the attention of Vatican experts far to the east. The criticisms of the events that matured last weekend, are well known: some have accused the Vatican of “selling out” the Church to China. Pope Francis replied calmly, saying of the Agreement, “I signed it myself,” explaining “I am responsible” for it. He asked for prayers for those who have lived “for years under clandestinity,” who today do not understand the import of the deal. In every peace accord, he recalled, “both sides lose something.” Yet now, he points out, “it is the Pope who names” the Chinese Bishops. Francis praised the “patience” and “wisdom” of the Vatican negotiators—including Cardinal Parolin, Monsignor Celli, and Father Rota Graziosi—saying he himself had evaluated all the materials on the Bishops who had not yet received papal approval, and pointing out that the appointment of Bishops would become the exclusive concern of the papacy in the not too distant future.

The “great faith” of the Chinese people
Remaining on the topic of China, Pope Francis paid tribute to the “great faith” of Chinese Catholics who have lived under trying circumstances for a long time. “There is always suffering with an agreement,” he noted, and related an anecdote: on the occasion of the “famous statement of a former apostolic nuncio” – which had led many episcopates to express their closeness to the Pope – the Chinese faithful, too, whether of the traditional Church or not, had signed a letter to tell the Pope of their solidarity. And for him, Pope Francis said, “that was the sign.”

Abuses are monstrous
The Pope answered a question by a German journalist inspired by the Pope’s words to young people in Estonia. It would be “monstrous” even if only a single priest had committed such crimes. Sexual abuse can be found everywhere, but in the Church, he insisted, they are much worse because priests should “bring children to God.” And on this point there can be no negotiation. However, Pope Francis observed, one should not commit the error of interpreting the past with the standard of justice, with the “hermeneutic” of today, when we have different sensibilities. Once these crimes “were covered up,” but once the “the Church became aware of this” she responded