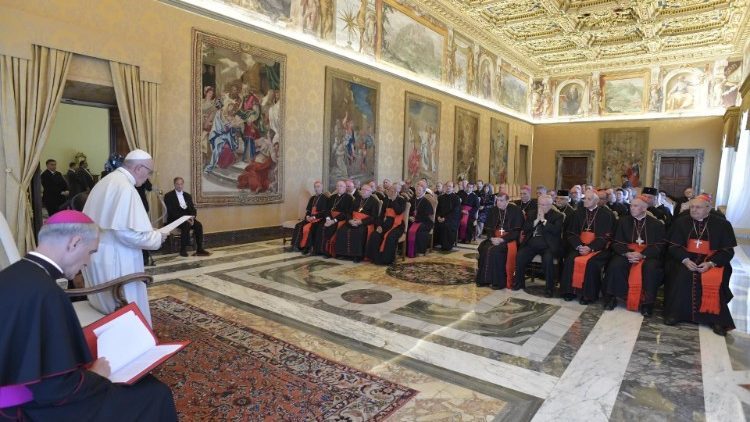 Pope Francis spoke Friday to participants in the Plenary Assembly of the Pontifical Council for Christian Unity, saying the Church can learn from discerning the Holy Spirit’s presence in charismatic communities.

The theme for the Plenary Assembly was “Pentecostals, Charismatics, and Evangelicals: Impact on the Concept of Unity”.

Pope Francis said the growth of these communities is “an important phenomenon, which cannot be overlooked.” He said, “We have the duty to discern and recognize the presence of the Holy Spirit in these communities, seeking to build bonds of authentic solidarity with them.”

He said this requires us to create opportunities for encounter and to overcome mutual feelings of diffidence, which, he said, are often caused by ignorance or a lack of understanding.

Pope Francis then shared a “mea culpa” anecdote from his time as Provincial Superior of the Jesuits in Argentina. The Pope said he had prohibited Jesuits in the country from engaging in dialogue with these communities, and admitted to saying they were a type of “samba school” rather than prayer meetings. Later, he asked forgiveness, and said that, as archbishop of Buenos Aires, he had a good relationship with them.

Pope Francis said Catholics can welcome the richness of charismatic communities under the guidance of the Holy Spirit.

“The Church grows in fidelity to the Holy Spirit the more she learns not to domesticate Him, but to welcome His fresh newness without fear and, at the same time, with serious discernment.”

These, he said, include: “prayer, listening to the Word of God, service to the needy, proclamation of the Gospel, and defense of people’s dignity and human life.”

Pope Francis said Catholics can learn to appreciate how they “live their faith, praise God, and witness the Gospel of charity.”

At the same time, he said fraternal encounters can help charismatic communities “to overcome prejudices about the Catholic Church and to recognize that – in the inestimable treasure of tradition, received from the Apostles and cared for throughout history – the Holy Spirit is not at all extinguished or suffocated, but continues to operate efficaciously.”

Finally, Pope Francis spoke about his experiences of ecumenism that took place during his Apostolic Journey to the Baltics.