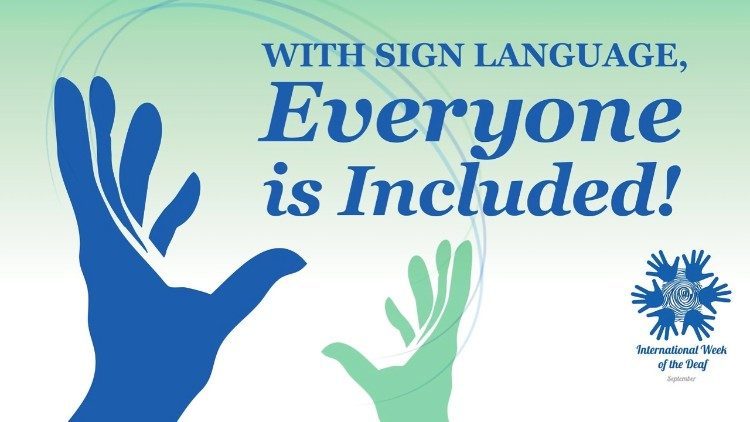 Pope Francis has sent a message to Italy’s National Agency for the Deaf on the occasion of the 60th anniversary of World Deaf Day, which this year is being observed on September 29.

Pope Francis on Friday called for the promotion of deaf people against today’s culture of exclusion and waste, by increasing their welcome, inclusion, encounter and solidarity.

The Pope’s appeal came in a message on the occasion of the 60th anniversary of World Deaf Day which  Italy is observing on September 29. this year.

The World Federation of the Deaf (WFD) initiated the observance of World Deaf Day in 1958, with the first celebration taking place in Rome on 28 September that year.  The annual day was later extended to a full week at the end of September, becoming the International Week of the Deaf (IWD).  The World Deaf Day is marked on the last day of the IWD.

In his message to the Ente Nazionale Sordi (ENS) or Italy’s National Agency for the Deaf, Pope Francis thanked the many men and women of good will, who through years have committed themselves “fighting exclusion and the culture of waste in order to protect and promote, in every area, the value of the life of every human being and, in particular, the dignity of deaf people.”

He said the history of E.N.S. is made by those who have not given up and have continued to believe in the self-determination of deaf people.  According to the Pope, the fact that many deaf people and their families no longer feel alone, is a great achievement.

The Pope lamented that while great progress has been made over the decades in the scientific, social and cultural fields, the dangerous and unacceptable culture of waste has also spread, because economic interest, power and unbridled consumption have replaced the centrality of the human person.  And among the victims of this culture, the Pope said, are the most fragile people, the elderly and young people.

Going against the tide

The Pope told the members of the National Agency for the Deaf that they are not a sum of people, but have formed an association to live and transmit their will to accompany and support those who, like them, are in difficulty but are first and foremost bearers of inestimable human wealth.

“Together we are called to go against the tide,” the Pope urged, “fighting first of all that the right of every man and woman to a dignified life be always protected.”  He said, “It is not just a question of satisfying certain needs, but even more of seeing one’s own desire to be welcomed and to be able to live independently recognized.”

The challenge, Pope Francis said, is that inclusion should become a mentality and a culture, and that legislators and leaders should not fail to give this cause their consistent and concrete support.