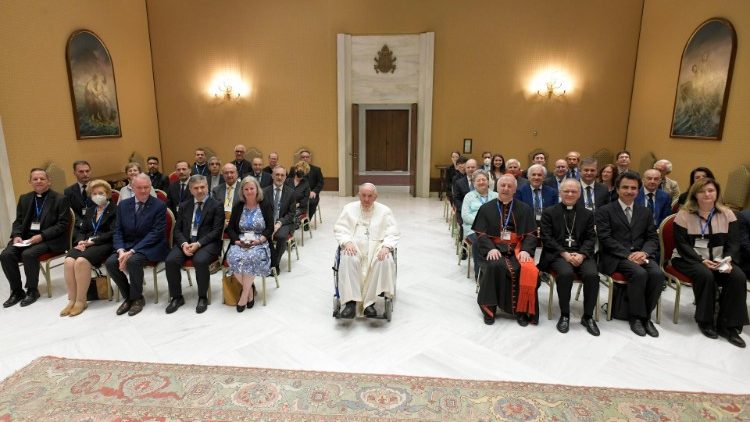 Pope Francis meets with participants in the International Conference on the Global Education Pact, a project he launched in 2019, and tells them the crisis we are experiencing can become a propitious moment for re-evangelisation.

In an address to participants in an International Conference on the Global Compact on Education, Pope Francis spoke about how a crisis can become a stimulus to set people out on new paths.

The example of Aeneas

This image, noted the Pope, “can serve to illustrate the mission of educators, who are called to preserve the past and to guide the steps of the young towards the future. It can also help us to reflect on some fundamental principles of the Global Compact on Education.”

Centrality of the person

The first of those principles said Pope Francis, is the centrality of the person.

He told those present that every educational process must be centred on persons and concentrate on what is essential; “everything else is secondary.”

Another essential element, highlighted the Pope, “is to invest the best energies with creativity and responsibility.”

Education, he noted “is always rooted in a past,” but it is also aimed at the future “where the old and the new come together in the composition of a new humanism.”

However, against all this, the Pope warned of a “fashion” that looks backward,  that claims to be the guardian of traditions but is dead of traditions.

Another fundamental element, he underlined, “is our need to educate for service.”

The “throwaway culture” would have us believe that, as soon as something no longer functions properly, it should be thrown out and exchanged. That is what we do with consumable goods,” Pope Francis said.

“Sadly, it has also become a mindset that affects what we do with people. For example, if a marriage no longer “works”, you change it; if a friendship is on the rocks, you cut bait; if an older person is no longer self-sufficient, you cast him or her aside.”

“Fragility, however, is synonymous with great value: the elderly and the young are like fragile vases, to be carefully protected.”

In conclusion, the Pope observed that at a time when technology and consumerism are turning us into users and consumers, “the crisis can become an opportunity for evangelization, for preaching anew the meaning of our humanity, our life, and this world in which we live.”

It can also be “an opportunity to reassert the centrality of the human person as a creature that, in Christ, is the image and likeness of its Creator.”