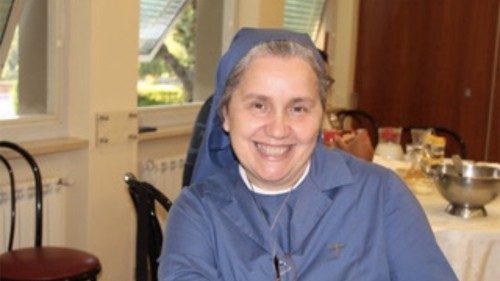 As part of our “Sisters Project” series, we look at the story of Sister Tosca Ferrante, an Italian nun who as a young girl dreamed of becoming a nurse or schoolteacher, though she later became a policewoman. Now she realizes that her religious vocation fulfills all these callings to offer her life for the needs of her neighbors.

A blue, single-breasted jacket, beret, holster hanging on her belt, and the historical motto: Sub Lege Libertas. This is the image that comes to mind when picturing a woman wearing the uniform of the Italian State Police.

And that’s how we can imagine Tosca Ferrante in 1989: a proud gaze and stern bearing, but with a different light in her eyes after her five years of service on the Italian police force.

“In those years, despite the joy, I felt a certain restlessness about the future and I continued to wonder about the meaning of life and on how God wanted to share it with me.” That’s how she tells about that especially intense period of her life.

But some decades ago, another motto was added to the state police’s historical one: “Esserci sempre” (“Always be there”).

In the intrinsic closeness of this expression, Tosca Ferrante began to live her role as a police officer in a completely different way. “I saw the faces of so many ‘poor’ people: delinquents, drug addicts, young women who were victims of prostitution, foreigners waiting for a residence permit who often fell prey to phony intermediaries’ schemes — so much poverty, so much emptiness and also so much evil.”

Those stories can strike, bleed, and chafe. They are stories that leave no room for indifference. Then one day, the final twist came.

“One day I was at the precinct of Tor Pignattara in Rome. I was asked to stand guard and wait for orders regarding a minor who had committed a robbery. We were in the same room and I started to talk to him about the motivations behind his actions (it was the first crime he had ever committed). I remember that moment perfectly. He started crying and said he was scared. He was crying non-stop, he was frightened. I listened to him, handed him a tissue. He really seemed helpless. At one point, still crying, he said to me: ‘I’m scared. Can you give me a hug?’. I said, ‘No’. I could not. I was on duty. But deep down, what did he ask me for? A hug! A gesture that is one of the first forms of communication with the world — a newborn is placed in its mother’s arms. It is warmth, a continuity of love, tenderness, protection. But I said no! When I got home, I looked in the mirror and asked myself, ‘who are you becoming?’”

Tosca as a policewoman

This was the beginning of her true encounter with the Risen Lord. This was Tosca’s journey to Damascus, the beginning of a serious period of discernment that led her to give her conscience an irrevocable answer.

“I realized that I had to risk Love!” After a few years she joined the Apostoline Sisters of the Istituto Regina degli Apostoli (Institute of the Queen of Apostles for Vocations), where she continues to care for the “poor” she had met while wearing a gun strapped to her belt.

“The transition from the police force to religious life wasn’t extraordinary for me. It was natural: my previous contact with the people I mentioned earlier had made me understand what God wanted for me”.

Desire to care for others

It was certainly a notable change in her life, however, through which Sister Tosca is able to see the footsteps of the One who guided her: “In fact, today, after so many years, I can make out the common thread that has held my life together: it is the desire to care for others by dedicating my own life to them”.

In fact, today she oversees vocation and youth pastoral ministry, as well as coordinating the Regional Service for the Protection of Minors and Vulnerable Adults in Tuscany.

Sister Tosca with a former colleague

A story for other young people

This religious sister’s unique story offers a powerful message to modern-day young people who are disoriented and lack points of reference. Even just the word “vocation” scares them.

“The things that will help us understand who we are called to be are around us — life’s situations – it’s that star which, from the outside, orients, drives, and guides us. I strongly believe that vocation is something we understand as we live, by looking at the reality in which we live, at the poverty that surrounds us. At least that’s how it was for me: I found God in the faces and stories of the poor: I bow to them! And I thank God!”