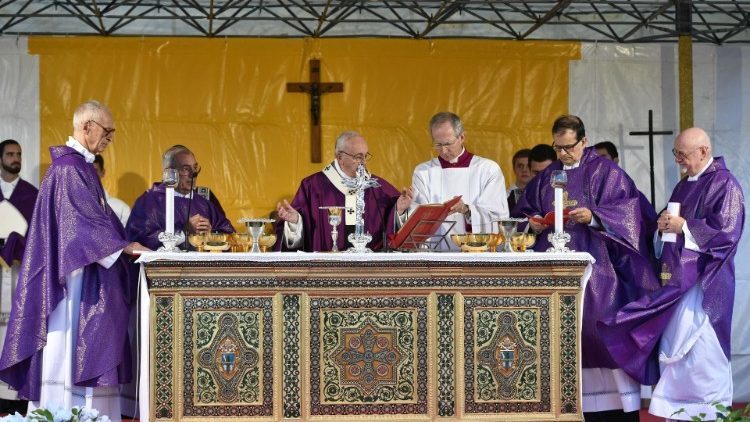 Pope Francis celebrated Mass for the Faithful Departed in Rome’s Laurentino Cemetery on Friday, observed in the Roman Rite as All Souls’ Day. It is one of the city’s newer cemeteries, having been dedicated in 2002 by Cardinal Camillo Ruini, at the time Cardinal Vicar for the Diocese of Rome.

“Today is a day of memory that takes us back to our roots,” the Pope said in his homily. “It is also a day of hope. It reminds us of what we can expect: the hope of encountering the love of the Father.”

Pope Francis concluded his homily with the prayer that “we may never lose our memories as a family, a people.” “May we never lose hope,” he said, “always contemplating the horizon, always looking ahead. May God grant us the grace to recognize the lights that accompany us to where He awaits us with so much love.”

Before the Liturgy, the Holy Father paused for a moment of silent prayer in a part of the cemetery set aside for young children who have died.

Continuing a long-standing tradition, Pope Francis, on his return to the Vatican, visited the Vatican Grottoes beneath St Peter’s Basilica, where he prayed for his predecessors in the Petrine ministry. Approximately one hundred Popes are believed to be buried under the Basilica.

On Saturday, Pope Francis will offer a Requiem Mass at St Peter’s for the repose of the souls of Cardinals and Bishops who have died in the course of the past year