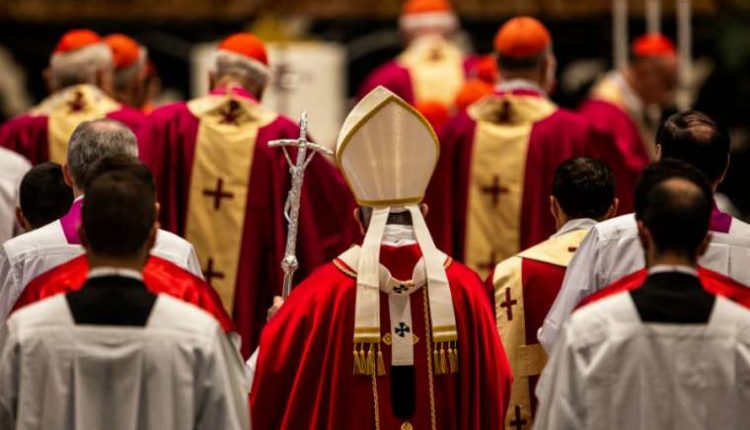 In a Mass offered for the repose of the souls of bishops and cardinals who died this year, Pope Francis prayed for “the intercession of all those who lived unassuming lives, content to prepare daily to meet the Lord.”

“The secret to life is to live to serve,” Pope Francis said in St. Peter’s Basilica Nov. 3.

Nine cardinals and 154 bishops have died since November 2017, including Cardinal Bernard Law, the former archbishop of Boston, and Cardinal Karl Lehmann, who led the German bishops’ conference for 20 years.

“Instead of our outward appearance that passes away, we should purify and keep custody of our heart, our inner self, which is precious in the eyes of God,” the pope said in his homily.

Pope Francis focused his message on the parable of ten bridesmaids who went forth to meet the bridegroom in the Gospel of Matthew.

“The encounter with Jesus, the Bridegroom, who ‘loved the Church and gave himself up for her,’ gives meaning and direction to our lives. That and nothing more. It is the finale that illuminates everything that preceded it,” Pope Francis said.

“Every day of our lives is a preparation for the wedding banquet, a great period of betrothal,” he continued.

The pope identified three qualities of the oil needed for the bridesmaids lamps in the Gospel story. The oil is not “flashy but essential.” It exists to be consumed, to serve. And, it must be prepared ahead of time.

“In the ministry, amid all our meetings, activities and paperwork, we must never lose sight of the one thread that holds the entire fabric together: our expectation of the Bridegroom,” he said. “The centre of it all can only be a heart in love with the Lord.”

“Let us desire to look farther ahead, to the wedding banquet that awaits us. A life burning with desire for God and trained by love will be prepared to enter the chamber of the Bridegroom, and this is for all eternity,” Pope Francis said.

Among the cardinals remembered at the Mass was longtime papal diplomat Cardinal Andrea Cordero Lanza di Montezmolo, who served as Apostolic nuncio to Israel, Italy, and Uruguay.

Cardinal Dario Castillon Hoyos, a Colombian and a former head of the Pontifical Commission Ecclesia Dei and of the Congregation for Clergy, and Cardinal Jean-Louis Tauran, former president of the Pontifical Council for Interreligious Dialogue and Camerlengo of the Holy Roman Church, also died this past year.

Cardinal Law died in Rome in December 2017 as the Basilica of Saint Mary Major’s archpriest emeritus. Law resigned from his position as archbishop of Boston in 2002 after reports that revealed that he did not disclose multiple allegations of clerical sexual abuse to the police or to the public or intervene to remove priests accused of sexual abuse from priestly ministry.

“Detachment from worldly appearances is essential to our preparation for heaven,” Pope Francis said at the Mass offered for the prelates’ souls.

“In the Lord’s eyes, what matters is not appearances, but the heart. Everything that the world runs after and then parades – honors, power, appearances, glory – passes away and leaves nothing behind.”