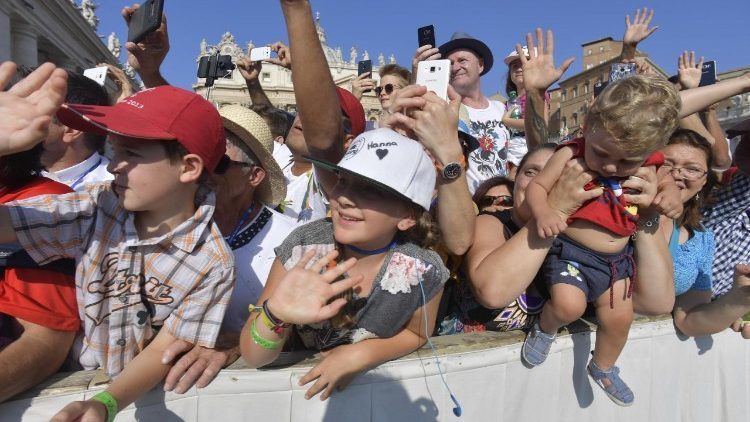 It’s a common scene on Wednesdays in St Peter’s Square. The Pope concludes his catechesis, imparts his blessing, and greets those admitted to the so-called “baciamano,” – that is, those who are privileged to be able to meet personally with the Holy Father, if only for a few moments. Various groups applaud as their loved ones are received by the Pope. That’s what happened this Wednesday, when a group of young people preparing for Confirmation raised a cheer when their Bishop, Benvenuto Italo Castellani, ascended the podium to greet Pope Francis.

This would all be completely normal, but for the fact that some people were convinced they heard a group crying out the name “Viganò,” the former Apostolic Nuncio to the United States, and the author a widely diffused document criticizing Pope Francis. Claims that the crowds were shouting Viganò’s name quickly spread on social media, and from there passed to the “mainstream” media, without being verified. However, listening carefully to the video recording of the audience (see below), one can hear that the chant clearly begins as a cheer for “Italo,” the familiar name for Lucca’s Bishop. Professional journalists were able to ascertain the presence in the Square of the group of confirmands from Lucca, and to note that the chant began at moment Pope Francis was receiving Bishop Castellani.

From the beginning of his pontificate, Pope Francis has expressed great confidence in journalists and others working in the field of information. He has shown this trust year after year, as seen, for instance, by his choice to grant interviews even to outlets without powerful patrons – such as a paper run by homeless people in Milan, or the radio station of an Argentine favela. It is an act of confidence that he renewed precisely with regard to the document of Archbishop Viganò, when he told reporters, “you are capable enough as journalists to draw your own conclusions.” The Pope’s trust recalls the essence of the journalistic profession, which seeks the truth, and does not distort it.