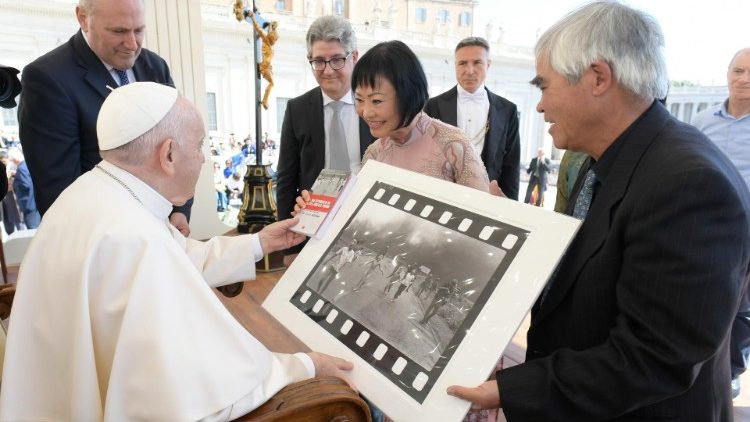 At the General Audience on Wednesday, Pope Francis meets Kim Phúc Pahn Thi, who was photographed nearly 50 years ago while fleeing from a napalm attack in Vietnam. She was accompanied by the photographer, Nick Ut, who won a Pulitzer Prize for the iconic photo.

Kim Phúc Pahn Thi and Nick Ut know war well. On 8 June 1972, in Vietnam, napalm bombs rained down on the village of Trang Bàn, some 40 kilometres west of Saigon.

Nick Ut ‘captured’ in a single shot the desperation of young Kim – only nine-years-old at the time – running from the fire, her clothes burned off her by the napalm. That photograph became one of the most iconic images of the 20th century.

Kim, who is now 59-years-old, says, “Half a century later, as a survivor, I allow myself to say that we do not want war, but peace. Because the world needs peace.” And it is with this commitment to peace that they are working, again together, on a documentary entitled “The Napalm Girl.”

“That morning it was raining bombs on the village; everyone was running away,” recalls Nick, now 71, who was on the front line as a photojournalist. “I saw a bomb explode on a pagoda. I thought no one was inside but instead, through the smoke, I caught a glimpse of Kim’s grandmother holding a baby, dead in her arms. The next thing I saw was Kim shouting ‘Help me!’ I stopped taking pictures after one shot, that shot: I had to act. I grabbed water and threw it on her. I loaded many children into the van and took them to the hospital.”

Back in his office in Saigon, Nick developed the photo that quickly became “the shot that tells the story of the war in Vietnam,” and for which Ut won the Pulitzer Prize.

Kim has her own memories of that day.

“That image keeps reminding me that I lost my childhood. Only with time, however, did I realise its value. At first I hated it, I saw humiliation in it: a child exposed to the world while, naked, she cries out in despair. I was also helped, treated: 14 months in hospital and 17 operations, without paying for anything.”

Almost half a century later, Kim and Nick were together in St Peter’s Square to meet Pope Francis, declaring once again that war is madness. That is why they gave the Pope a copy, with both of their signatures, of the photo that has been declaring ‘no to war’ for almost fifty years.

Pope Francis reiterated his opposition to war this morning, as he also welcomed two young women who are experiencing the horrors of another conflict, the war in Ukraine. They are the wives of Ukrainian soldiers from the Azov battalion barricaded in the Mariupol steelworks. Standing up to greet them, Pope Francis clasped their hands in a gesture of prayer.

Wives of Ukrainian soldiers appeal to Pope Francis for help

Cardinal Farrell: Despite limitations, Pope Francis carries on “with a great heart”