Cardinal Farrell: Despite limitations, Pope Francis carries on “with a great heart” 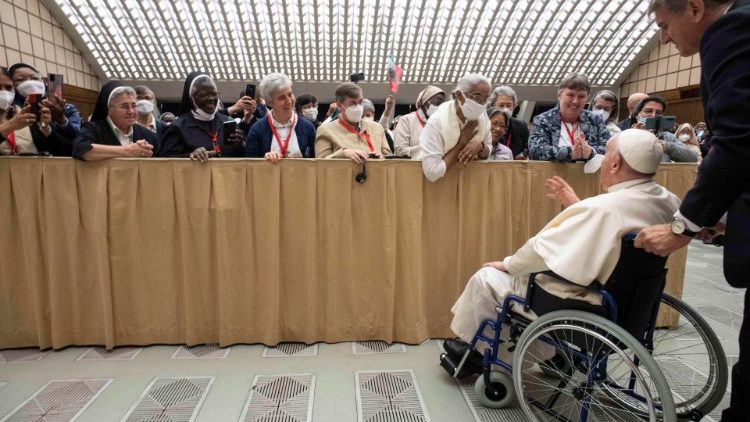 Reflecting on the Pope’s physical limitations imposed by knee pain, Cardinal Kevin Farrell applauds the ‘greatness’ of Pope Francis, who continues his activities as before with great stamina. The Cardinal also tells Vatican News how the elderly and young are those most affected by the war.

Cardinal Kevin Farrell says the Pope may have limitations in his old age, but he accepts them with a great spirit and heart, and isn’t going to stop.

The Prefect of the Vatican’s Dicastery for Laity, Family and Life stressed this when responding to questions from Associated Press and Vatican News during the 10 May press conference in the Holy See Press Office to present the Pope’s Message for the 2nd World Day for Grandparents and the Elderly, which falls this year on 24 July, near the Feast of Saints Joachim and Anne.

Pope Francis instituted this World Day in 2021 since grandparents are often forgotten, but yet “are the link between generations, passing on the experience of life and faith to the young.”

A question from Associated Press on Tuesday noted that the Pope refers to himself in this message, noting that he is among the elderly. Mentioning that the 85-year-old Pope has been experiencing old age as his knee condition causes him pain and has affected his mobility, she asked if he could comment as a close collaborator to the Holy Father.

Cardinal Farrell emphasized that the Pope’s suffering enables him to empathize with elderly and their challenges.

“The Pope accepts his limitations, in this moment with a great spirit and a great heart,” he said. “I think he’s an example to all of us.”

“We should not hide the fact that with age comes a lessening of our ability to play an active part in the life of the world today.Listen to Cardinal Farrell speak about the Pope’s stamina:

The Pope he said, “shows us also that with the limitations that he has physically and with age, he’s not going to stop. He sends a message to all of us that we all have to carry on.”

The Cardinal said, “We may have limitations in old age, but we carry on and we do our best.”

The Holy Father, the American prefect continued, “is a great example to all elderly people, not just because he has the limitation of being in these days in a wheelchair because of his knee, but because he carries on.”

Pope is doing no less than before

This, the Cardinal said, is what Pope Francis wants to tell all of the elderly people.

The Cardinal said they hope this will happen, and that is why the Holy Father “has insisted for the last two years that there be a special day that is celebrated not just in Rome, but celebrated in every church and every diocese in the world.”

“I think that is the greatness of this Pope,” he said.

The Church’s closeness to the elderly abandoned in Ukraine

Vatican News English highlighted that the Pope’s message referred to the ongoing war in Ukraine and asked the Cardinal how all of the elderly and grandparents who have not been able to leave the country are being remembered this World Day, and how the Church is reaching out to them.

“Certainly, I do not believe that anyone of us who sees the terrible tragedy, the human tragedy of this war, and sees the images we see every night and day on television, and on the news broadcasts of elderly people, our hearts cannot but be moved and go out to these people.”Listen to Cardinal Farrell speak about the Church’s prayers for the elderly suffering from the war in Ukraine:

He suggested there are no words to describe the horror and the suffering of what goes on.

The Cardinal recalled Pope Francis expressing at recent audiences, Regina Coeli addresses and elsewhere, his heartbreak about what is happening. Again, on Sunday, 8 May, following the Regina Coeli prayer to the thousands in St. Peter’s Square, the Pope appealed once more, “In the face of the madness of war, let us continue, please, to pray the Rosary for peace every day.”

“The whole world needs to come together to pray for the end of this war in Ukraine. I cannot say anything more. The Church does what it will always do. It will pray for these people. It will help in any way possible. And it will intervene. It will appeal to people to bring this terrible tragedy to an end.”