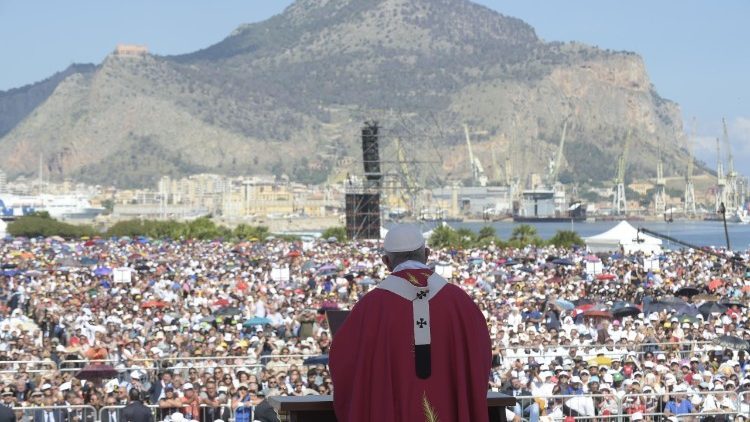 Pope Francis celebrated Mass on Saturday during his pastoral visit in the Italian city of Palermo, saying Christians must choose either love or selfishness, victory or defeat.

“You cannot believe in God and be a member of the mafia,” the Pope declared. “Those belonging to the mafia are not living as Christians, because with their life they blaspheme the name of God who is love.”

Pope Francis’ visit to the Sicilian city coincided with the liturgical memorial of Blessed Pino Puglisi, a local priest killed by the mafia 25 years ago.

The Holy Father said Don Pino’s life highlighted the Christian’s choice between self-love and selflessness. He said the priest showed how the victory of faith “is born from the scandal of martyrdom.”

Pope Francis said Christians do not hate life but love and defend it, since “it is God’s first gift!”

“But this is the great illusion,” Pope Francis said, “money and power do not liberate the human person, but make us slaves.” He said the reason is because “having always leads to wanting.”

Jesus, the Pope said, turns this logic on its head. “Those who live for themselves do not just lose something, but their entire life; while those who give themselves find meaning in life and conquer.”

Pope Francis said Don Puglisi knew that the true danger in life is not taking risks, living in comfort and by half-measures.

Finally, Pope Francis invited Mafiosi to convert to the true God of Jesus Christ. “Change yourselves! Stop thinking of yourselves and your money,” he said.

Rather, he implored the people of Palermo: “Choose love!”