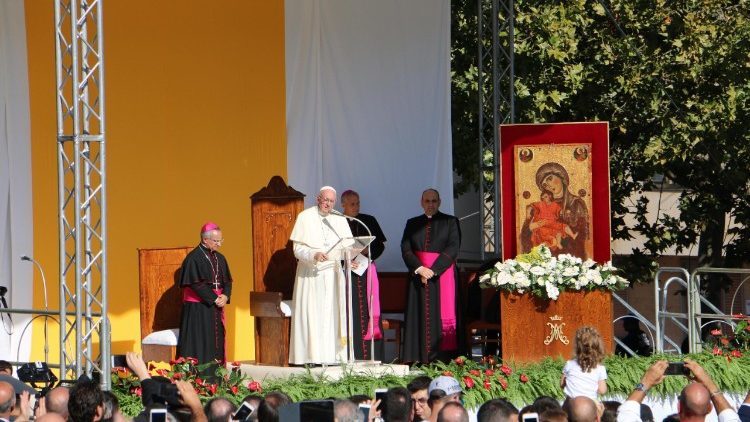 Addressing the faithful of Piazza Armerina Diocese, Pope Francis acknowledged the many problems and wounds that afflict them such as social and cultural underdevelopment, exploitation of workers and lack of decent employment for young people, migration of entire families, usury, alcoholism and other addictions, gambling and fraying family ties.

“In the face of so much suffering,” the Pope urged them to build an ecclesial community that is “lively and prophetic, while seeking new ways of proclaiming and offering mercy above all to those brothers and sisters who have fallen into disaffection, distrust, and a crisis of faith.”

The Pope told the people of central Sicily that faith becomes concrete when in these human sufferings one learns to recognize the very wounds of the Lord.  He thus urged them to commit themselves to the new evangelization of their territory, starting precisely from its crosses and sufferings.  In this enthralling mission, he urged them to propose once again the face of a synodal Church and of the Word, and a Church of missionary charity and of Eucharistic community.

The word of God and synodal communion, the Pope said, are the Church’s hands that reach out to those who feel defeated in body and spirit, or are relegated to the margins.   He underscored the Word of God as the essential centre of Christian communion, and not to anything else before it.

The Church of missionary charity, the Pope said, takes shape by having “evangelical compassion for the many evils of the people”, and by “becoming itinerant apostles of mercy in the territory”.  The Pope however reminded the faithful that Christian charity is not philanthropy or mere assistance, but goes beyond to remove the causes of hardships.

The Pope pointed out that the Church’s missionary charity also dedicates special attention to young people and their problems.  The Holy Father encouraged his young listeners “to be joyful architects” of their destiny, assuring them that Jesus is a sincere and faithful friend.

Speaking about the Church as a Eucharistic community, the Pope said it is “from the Eucharist that  we draw the love of Christ to take Him to the streets of the world, to go with Him to meet His brothers and sisters”.

Pope Francis also urged the priests of the diocese to be united among themselves with their bishop, to overcome divisions and prejudices, to humbly contemplate the difficult history of their land and to find paths of redemption and true freedom for their flocks.

In conclusion , the Holy Father gratefully recalled the martyred priest, Don Pino Puglisi, who visited Piazza Armerina a month before his assassination 25 years ago to meet his seminarian students.  The Pope described the visit as a “prophetic passage”, a legacy not just for priests but also for all the faithful of the diocese, that of serving their brothers and siters to the end, for the love of Jesus.

Pope at Mass: the cross teaches us not to fear defeat