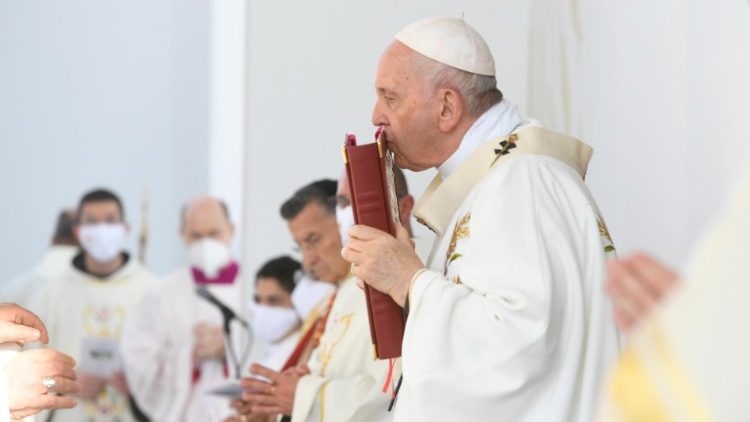 Pope Francis refers to the parable of the two blind men from Mark’s Gospel to urge Cypriots to follow three steps in order to be freed of a similar darkness in which we often find ourselves.

Addressing the faithful in Nicosia’s “GSP Stadium” for Holy Mass in Cyprus, Pope Francis recalled a passage from Mark’s Gospel, in which as Jesus passed by, two blind men cried out “Have mercy on us, Son of David”. The Pope noted that the two men are blind, yet they realise that Jesus is the Messiah who has come into the world. They can help us, during this advent season, “to welcome the Lord when he comes”, said the Pope.

Step one: going to Jesus

Pope Francis noted that the first step is that the two “went to Jesus for healing”. Although they cannot see him, he said, “they hear his voice and follow his footsteps”. The two men in the Gospel trusted in Jesus, he continued, and so “they followed him in search of light for their eyes”.

The Pope noted that the two trusted in Jesus because “they realise that, within the darkness of history, he is the light that brightens the “nights” of the heart and the world”. He stressed that we too have a kind of “blindness” in our hearts, and like the two blind men are often immersed in the darkness of life.Often we would rather remain closed in on ourselves, alone in the darkness, feeling sorry for ourselves and content to have sadness as our companion, but instead we must go to Jesus, said the Pope. Let us give Jesus the chance to heal our hearts.

The next step, continued the Pope, is that “they shared their pain”. They ask for help together, said the Pope. “This is an eloquent sign of the Christian life and the distinctive trait of the ecclesial spirit: to think, to speak and to act as “we”, renouncing the individualism and the sense of self-sufficiency that infect the heart”.

These two blind men have much to teach us, continued the Pope. “Each of us is blind in some way as a result of sin”, he explained, adding that this “prevents us from “seeing” God as our Father and one another as brothers and sisters”. This sin distorts reality, continued the Pope, but if we bear our inner blindness alone, we can become overwhelmed. “We need to stand beside one another, to share our pain and to face the road ahead together”, he said.

Renew our sense of fraternity

Dear brothers and sisters, continued the Pope. “Faced with our own inner darkness and the challenges before us in the Church and in society, we are called to renew our sense of fraternity”. If we remain divided we will never be completely healed of our blindness”, he stressed.  Healing takes place when we carry our pain together, when we face our problems together, when we listen and speak to one another.

The third, and final step, continued the Pope, is “they joyfully proclaimed the Good News”. After Jesus had healed the two blind men, the two “began to spread the good news to the entire region”. There is a bit of irony in this, noted the Pope. “Jesus had told them to tell no one what had happened, yet they do exactly the opposite”. Their intention was not to disobey the Lord, said the Pope. “They were simply unable to contain their excitement at their healing and the joy of their encounter with Jesus”. This, he added, “is another distinctive sign of the Christian”.

Bringing his homily to an end, the Pope thanked all thos present in the Nicosia stadium for living “with joy” the liberating message of the Gospel, and encouraged them to “keep advancing on this path”. Like the two blind men in the Gospel, “let us once more encounter Jesus, and come out of ourselves to be fearless witnesses of Jesus to all whom we meet!”

“Brothers and sisters, the Lord Jesus is also passing through the streets of Cyprus, hearing the cries of our blindness”, stressed the Pope. “He wants to touch our eyes and hearts and to lead us to the light, to give us spiritual rebirth and new strength”. Let us renew our faith in him, concluded the Pope, “Let us say to him: Jesus, we believe that your light is greater than our darkness; we believe that you can heal us, that you can renew our fellowship, that you can increase our joy”.