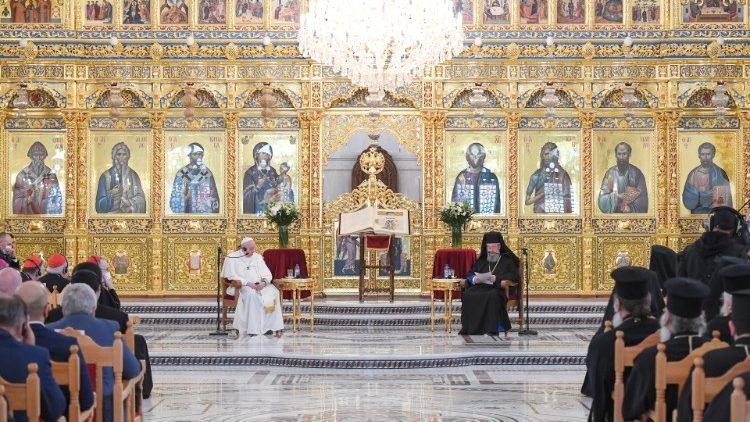 On the second day of his visit to Cyprus, Pope Francis meets with the Holy Synod of the Cypriot Orthodox Church. During his address, the Pope underlined the common bonds between the Catholic and Orthodox Churches and his desire to deepen ecumenical dialogue, taking as his model St Barnabas.

Greeting the Bishops of the Holy Synod at the Orthodox Cathedral of Cyprus on Friday morning, Pope Francis told them that being in Cyprus reminded him of the “common apostolic origin” they share. “Paul traversed Cyprus and went on to Rome,” he said. “We are thus heirs of the same apostolic zeal, and a single path joins us, that of the Gospel. I like to see us advancing on that same path, seeking ever greater fraternity and full unity.”

The Pope’s attention turned to the figure of St Barnabas, noting that his name means both “son of consolation” and “son of exhortation.”

“It is fitting,” Pope Francis said, that “he combines both these characteristics, which are indispensable for the proclamation of the Gospel.”

“If we are to be sons of consolation,” remarked the Pope, “even before we say a word, we need to listen, to let ourselves be questioned, to discover others, to share.  Because the Gospel is not handed on by communication, but by communion.”

The Pope added that it is this that Catholics want to experience in the next few years, through the Synod of Bishops.

During his address, Pope Francis assured those present of his prayers and closeness, and that of the Catholic Church, in the most troubling problems that beset them and “in the best and boldest hopes that spur you on.”

“Your sorrows and your joys are also ours; we sense them as our own. At the same time, we feel great need of your prayers.” He also spoke of how moved he was by his Beatitude Chrysostomos II’s words on the Mother Church during their dialogue.

Another aspect the Pope dwelt on in the life of St Barnabas was his bold and selfless gestures.

“Let us not become paralyzed by fear of openness or bold gestures, or give in to talk of ‘irreconcilable differences’ that in fact have nothing to do with the Gospel,” said the Pope.

Pope Francis noted that by laying all he had at the feet of the apostles, St Barnabas entered into their hearts. “He invites us not to grow resigned to our past divisions and to cultivate together the field of the kingdom with patience, perseverance, and concrete gestures.”

One good example of this, highlighted by the Pope, is Panaghia Chryssopolitissa, “Our Lady of the Golden City,” today a place of worship for the various Christian confessions, much loved by the people and often chosen for celebrations of marriage. “It is thus a sign of communion in faith and life under the gaze of the Mother of God who gathers her children together,” he said.

Another aspect Pope Francis drew from in the life of St Barnabas was the trials he suffered, especially around falsehoods and malicious behaviour.

“Today, too, there is no lack of falsehood and deception that the past can set before us to hinder our journey,” he said. “Let us ask the Lord to grant us the wisdom and courage to follow His ways, not our own.”

In conclusion, the Pope noted that there are many Saints, like St Barnabas, who “urges us to sail together towards that harbour to which we all aspire. From on high, they encourage us to make of Cyprus, already a bridge between East and West, a bridge between heaven and earth.”