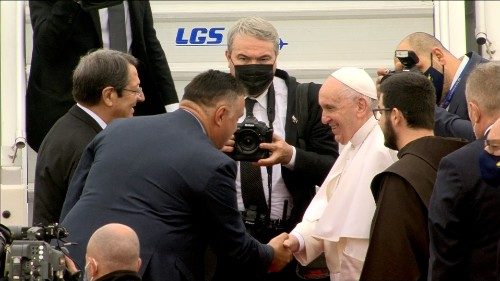 After two days in Cyprus, Pope Francis departed Cyprus’ Larnaca airport at 8:30 am on Saturday morning for the Athens International Airport where he is scheduled to arrive at 11:10 local time.

The Holy Father’s official welcome at the airport will be followed by a welcome ceremony at the Presidential Palace in Athens. He will then pay a courtesy visit to the President of Greece, Katerina, Sakellaroupoulou, meet with the Prime Minister and then with local authorities, civil society and the diplomatic corps.

The Pope’s afternoon schedule also includes a meeting with the country’s bishops, priests, religious, consecrated person, seminarians and catechists at the Cathedral of St. Dionysius in Athens. He will then have a private meeting with the members of the Society of Jesus at the Apostolic Nunciature of Athens.

On Sunday, one highlight of the Pope’s lineup will be his visit with migrants and refugees at the “Reception and Identification Center” in Mytilene town on the Greek island of Lesbos. For the second time in five years, the Pope will visit this island that has been dealing with migrant arrivals.

The Pope is scheduled to return to the Vatican on Monday.