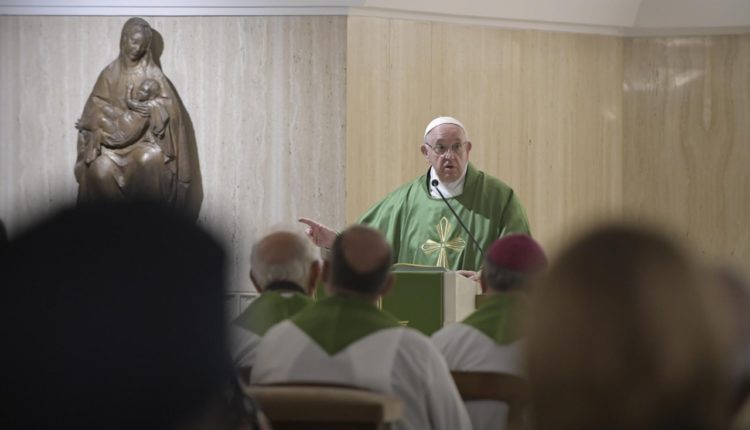 Pope Francis based his homily on the day’s Gospel, which tells how Jesus did not observe the prescribed cleansing when He was invited to dine at the home of a Pharisee. The Gospel relates the harsh response of Jesus at the “amazement” of the Pharisees.

Doctors of the Law scandalized by Jesus

The Pope emphasized the difference between the love of the people for Jesus, who loved Him because He touched their hearts, and a little bit because of their own interest; and the hatred of the doctors of the Law, the scribes, the Sadducees, the Pharisees, who followed Him in order to catch Him in an error. They were the “pure”:

They were truly an example of formality. But they lacked life. They were, so to speak, “starched.” They were rigid. And Jesus knew their soul. This scandalizes us, because they were scandalized by the things Jesus did when He forgave sins, when He healed on the Sabbath. They rent their garments: “Oh! What a scandal! This is not from God, because Heshould have done this” [instead]. The people didn’t matter to them: the Law mattered to them, the prescriptions, the rubrics.”

Jesus, though, accepts the invitation of the Pharisee – because He is free – and He goes to him. The Pharisee was scandalized by His behaviour which went beyond the rules. But Jesus says to him, “You Pharisees cleanse the outside of the cup and the dish, [but] inside you are filled with plunder and evil.”

They are not beautiful words, eh? Jesus spoke clearly, He was not a hypocrite. He spoke clearly. And he said to them, “But why do you look at what is external? Look at what is within.” Another time He said to them, “You are whitened sepulchres.” Nice compliment, eh? Beautiful on the outside, all perfect… all perfect… but within, full of rottenness, therefore of greed, of wickedness, He says. Jesus distinguishes between appearances and internal reality. These lords are “doctors of appearances”: always perfect, always. But within, what is there?

Pope Francis recalled other passages in the Gospel when Jesus condemned such people, as He did in the parable of the Good Samaritan, or when He denounced their ostentatious manner of fasting and almsgiving. This, he said, is because they were interested only in appearances. “Jesus describes these people with one word: ‘hypocrites’.” They are people with greedy souls, capable of killing: “capable of paying to kill or calumniate, as happens every day. It happens today: they are paid to give bad news, news that smears others.”

Behind rigidity there are grave problems

In a word, Pope Francis continued, the Pharisees and doctors of the Law were rigid people, not disposed to change. “But always, under or behind rigidity, there are problems, grave problems,” the Pope said. We intend to have the appearance of being a good Christian; we intend to appear a certain way, we put make-up on our souls. However, Pope Francis said, behind these appearances, “there are problems. Jesus is not there. The spirit of the world is there.”

Do I open my heart?

Finally, the Pope warns us,

Synod of Bishops: The challenge of translating the Synod