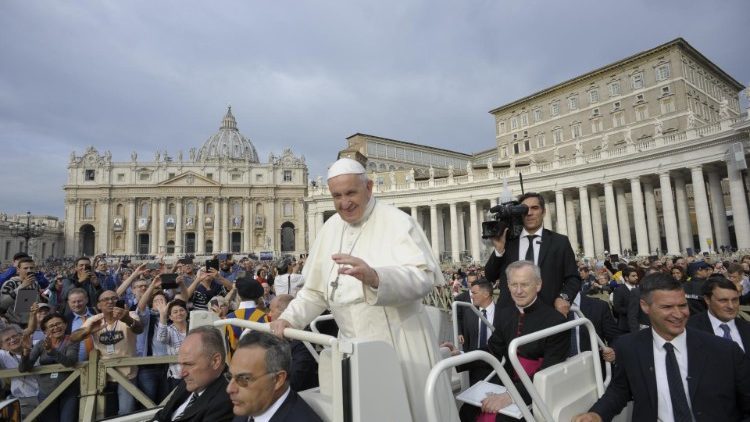 This week’s General Audience took place in an overcast St Peter’s Square before pilgrims and visitors from all over the world. The Holy Father continued his reflections on the Ten Commandments, this time focusing on the Fifth: “Do not kill”.

Pope Francis said that, read in the context of St John’s Gospel, “Jesus reveals a deeper meaning of this commandment”. Even anger against a sister or brother “is a form of murder”. But Jesus does not stop at this, continued the Pope: in the same logic, Jesus adds that even insult and contempt can kill.

“It would be nice if this teaching of Jesus were to enter into our minds and hearts”, said Pope Francis, “because Jesus says to us: ‘If you despise, if you insult, if you hate, this is murder’ “.

The Pope reminded his audience how Jesus invites us to reconcile ourselves with those who have offended us, before we offer our sacrifice in the temple. “When we go to Mass, we too should have this attitude of reconciliation”, he said. Pope Francis gave the concrete example of people gossiping about others as they wait for the priest to begin celebrating: “We chat a little and we talk badly about others. But this cannot be done.” Jesus equates insult, contempt and hatred with killing, he said.

The Pope continued to provide concrete examples, pointing out how we all possess a sensitive, hidden self that is no less important than our physical self. An “inappropriate phrase”, he said, is enough “to offend the innocence of a child. To hurt a woman, a gesture of coldness is enough. To break a young person’s heart, it is enough to deny them confidence. To annihilate someone, it is enough to ignore them.” Indifference kills, concluded Pope Francis. “Not loving is the first step to killing; and not killing is the first step to loving”.

“None of us can survive without mercy, we all need forgiveness”, he continued. “So, if killing means destroying, suppressing, eliminating someone, then not killing means taking care of, giving value to, including. And forgiving”.

The Commandment, “Do not kill”, is a call to love and mercy, said Pope Francis. “It is a call to live according to the Lord Jesus”. The Pope then invited all those in St Peter’s Square to remember and to repeat this simple phrase: “Doing no harm is a good thing. But not doing good is not good”. We must always do good, he said