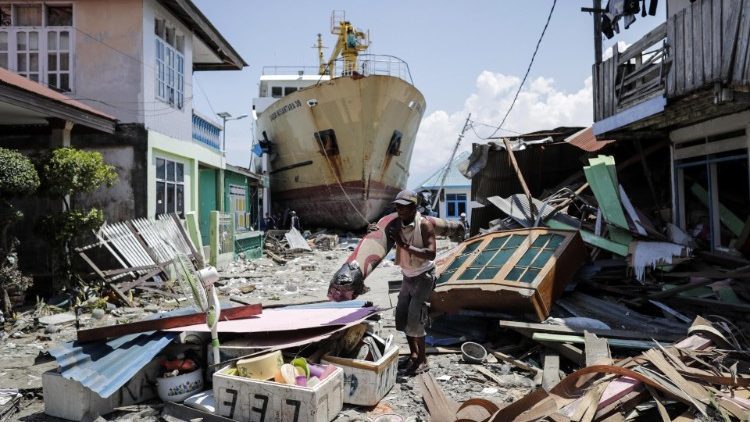 Italy’s Catholic charities are joining its counterpart in Indonesia to bring help to those hit by a 7.4 magnitude earthquake and a devastating tsunami that struck the Central Sulawesi province on September 28.

Caritas Italy, the social arm of the Catholic Church of Italy, has destined 100,000 Euros for the urgent needs of those hit by the disaster that has killed more than 1,200 people as of Tuesday.

More bodies are likely to be found as rescuers began reaching coastal areas that were cut off by blocked roads and breakdown of communications lines.

Rescuers have focused much of their attention so far on the coastal city of Palu, which has 380,000 people and is easier to reach than other hard-hit areas.

The death toll for all affected areas reached 1,234, national disaster agency spokesman Sutopo Purwo Nugroho said in Jakarta, the capital. He said the toll is likely to rise.  Nearly 62,000people have been displaced from their homes, Nugroho said.

More than 25 countries have offered assistance after Indonesian President Joko “Jokowi” Widodo appealed for international help.  Little of that, however, has arrived in the quake zone, and increasingly desperate residents grabbed food and fuel from damaged stores and begged for help.

Meanwhile, Caritas Ambrosiana, the charity arm of the northern Italian Archdiocese of Milan, has allocated an initial amount of 30,000 Euros for the affected people of Central Sulawesi.

The initiative by the Italian Church is in response to the appeal for solidarity made on Sunday by Pope Francis.

The funds will be utilized through Caritas Indonesia-Karina, to the local Caritas of the dioceses of Manado and Makassar that are the closest to the disaster region.

Tuesday afternoon, a Caritas team from the Archdiocese of Makassar arrived in Palu to coordinate relief efforts from the Immaculate Heart of Mary Parish, according to a post on Facebook by Caritas Indonesia-Karina.

The team will conduct field studies while awaiting logistic assistance from Mamuju.  The survivors are in desperate need of clean drinking water, food, rice, fish, bedding and tarpaulin