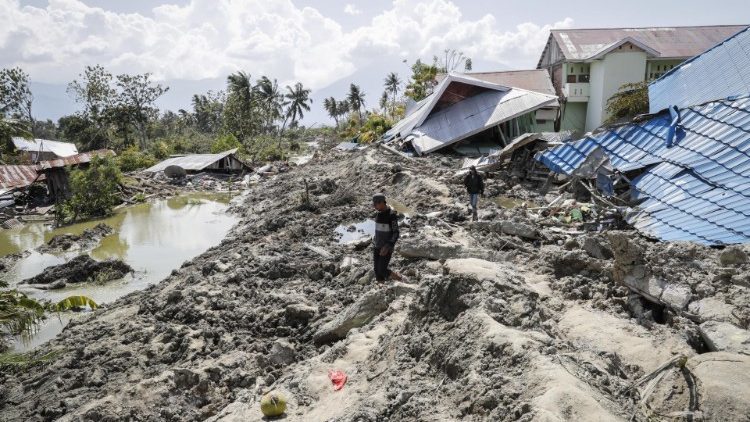 Indonesia’s Catholic Church has swung into action to reach out to the victims of a 7.5 magnitude earthquake and a devastating tsunami that struck Palu, Donggala and other parts of Central Sulawesi province on Friday.

The disaster has killed at least 840 people so far,  and the number is likely to rise with bodies still being pulled from under the rubble of collapsed buildings, as rescuers reached out to remote villages cut off because of the disaster.

All but 23 of the confirmed deaths were in the Central Sulawesi capital Palu, a city of about 380,000 people.  The battered city began burying its dead on Monday.

The disaster also left over 580 people injured and forced more than 16,700 others to flee their homes, according to the National Disaster Mitigation Agency.

Survivors are facing a short of food, water and fuel.  Lines of car, several kilometres long could be seen leading up to filling stations while supermarkets were emptied out. People said they had been looted. Mini marts and convenience stores were also empty.

Father Banu Kurnianto, director of Caritas Indonesia, the social arm of the Catholic Church of Indonesia, told AsiaNews that two of his aides have left for Makassar in South Sulawesi province and for Palu, the epicentre of the disaster.

The priest from the Archdiocese of Semarang said with telephone service knocked out, it was difficult to make contacts with Caritas officials on the ground.   He said that emergency measures depend on the current situation on the ground.

Currently, Caritas is working closely with its partners in the Diocese of Manado in North Sulawesi under whose jurisdiction comes Central Sulawesi and the Archdiocese of Makassar in South Sulawesi.

Makassar Archdiocese has authorized its Socio-Economic Development Commission to open a bank account to raise funds for the emergency.

Palu which is easily accessible by road from both Manado and Makassar, is unreachable because of damaged roads and bridges.

Caritas is trying to coordinate with its local units in the two dioceses to reach out to the affected areas.

The priest told UCANEWS that some parishes in the area have been heavily hit.  Father Johanis Salaki from the Immaculate Heart of Mary Parish in Palu told Father Clement that at least two parish churches have been partially destroyed.

At least 500 priests, nuns, seminarians and lay Catholics have been forced to relocate to the compound of the parish without tents since the disaster.

Father Clement said they will soon send a team to Palu to assess the situation there.  He has set up a logistics team in the commission’s office where material aid from local Catholics can be collected.

In the Vatican, Pope Francis on Sunday recalled the victims of Indonesia disaster.  “I pray for the deceased – which are unfortunately numerous – for the wounded, and for those who have lost their homes and employment,” the Pope told the faithful in St. Peter’s Square after reciting with them the midday ‘Angelus’ prayer.  “May the Lord console them and sustain the efforts of those who are taking part in the relief efforts,” he said and invited them to join him in praying the ‘Hail Mary’ for “our brothers and sisters” of Sulawesi.

He said the European Union and 10 countries have offered assistance, including the United States, Australia and China.