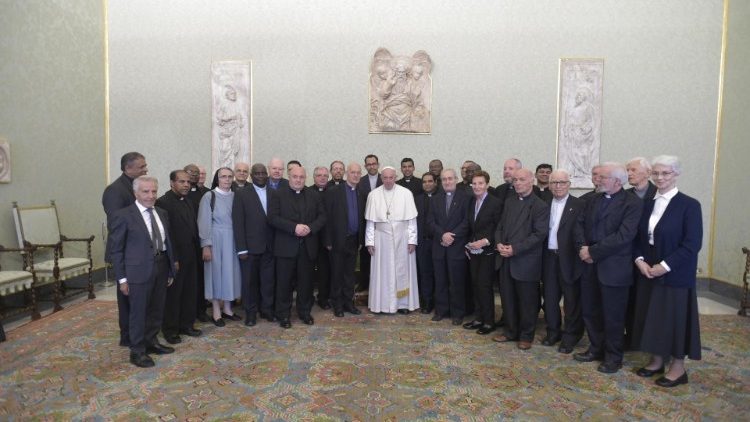 Pope Francis on Monday received in the Vatican members of the Institute of Charity (IC), known as the Rosminian Fathers and Sisters, saying holiness and the exercise of virtues is the way of the true reform of the Church.

The Rosminians, founded by  Blessed Antonio Rosmini in early 19th century, are holding their General Chapter until October 23

Holiness belongs to all, always

Pope Francis drew attention to the theme of their General Chapter, “Be Perfect…Be Merciful”, and said that every Christian is called to holiness and to travel along this path in charity together with others.   “Holiness and the exercise of virtues,” he said, “are not reserved for a few, nor are they reserved for any particular moment of existence.”  They can be lived in daily fidelity to the Christian vocation by all, he said, particularly by consecrated persons, in faithful adherence to their religious profession.

Holiness, the Pope pointed out, is the way of true reform of the Church, which, according to Rosmini transforms the world to the extent that it reforms itself.

Charity above all else

The Holy Father noted that Blessed Rosmini had wanted to call his religious family “Institute of Charity“, precisely to highlight the supremacy of the virtue of charity, which according to St. Paul is “above all else”.

Rosmini accompanied charity with the fruitfulness of interior silence and the heroism of exterior silence, a path that produces fruits of good and holiness.  The Pope also underscored the importance of maintaining the “holy indifference” of the Jesuits, without which, he said, it is not possible to carry out authentic universal charity.

In their works of corporal, intellectual, spiritual and pastoral charity, the Pope urged the Rosminians to be open to the Holy Spirit , saying He indicates where, when, and how to love.   The Pope wished that their work of education is not reduced to mere instruction, but to intellectual charity.

Noting their presence in India, Tanzania, Kenya, the United States and Europe, the Pope urged the Rosminians to be people with hands always outstretched towards the suffering, to bring them the help of faith and charity. The Holy Father particularly noted the presence of Rosminian Fathers and Sisters in Venezuela who are close to the suffering people in thier spiritual and material hardships.