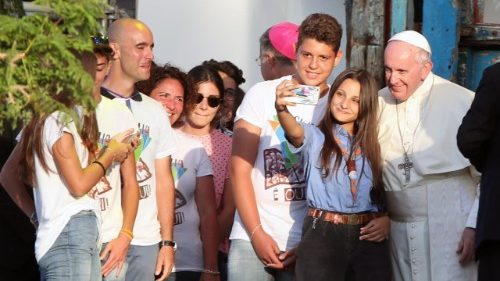 A Synod of Bishops is a crucial moment in the life of the Church. It is a time for it to reflect on its current status and look to its future, a time to adjust to a world in the throes of change and to set itself new goals and adopt new idioms so as not to lose its footing and risk becoming irrelevant.

All that is especially true in the case of the Synod taking place here in the Vatican throughout the month of October, because it focuses on the very people who will make or break it in the future: young people.

At a press conference at the Holy See Press office on Monday morning, Cardinal Baldisseri carefully explained Synod procedures pointing out that a new Apostolic Constitution signed – significantly – by the Pope just two weeks ago, strengthens the involvement of the “People of God” and further promotes dialogue and collaboration between bishops and between bishops and the Pope.

This, he said will give even more clout to the final document Synod Fathers are called to produce, after listening to the interventions of the Synod Fathers themselves and of the so-called 49 auditors, of whom 36 are young people chosen to represent their peers from the five continents.

All in all some 300 cardinals, bishops, priests, religious and lay experts will be taking part, and for the very first time since Paul VI established the Synod of Bishops in 1965 to collaborate with the Pope, discuss topics and make recommendations, two bishops from mainland China have been able to accept the invitation thanks to last month’s landmark agreement between the Holy See and Beijing.

As for communicating to the world what is going on inside the Synod Hall, the Dicastery for Communication will be on hand with reports, videos, daily multi-language briefings and lots of social media activity including a special #synod2018 hash tag on twitter.

Asked whether the latest revelations regarding widespread clerical sex abuse may have spawned a climate of distrust and anger which could lead to a breakdown in communication between young people and the Church, Baldisseri said he is confident the Synod  will provide a golden opportunity for exchange on this critical issue as well.

Pope Francis himself is expected to be present for many – if not all – the Synod sessions, but in a clear sign he it does not want it to be seen as a closed-doors event for a few privileged invitees, he has asked hundreds of young people to join him and synod participants on Saturday in the Vatican audience hall for an evening of music and some lively exchange.

The Church wants to do its part

The Church, Baldisseri highlighted again and again, wants to do its part in walking with its people, and that, he said, is what we intend to do in this Synod “with open eyes and ears, but also with open hearts and minds” accepting the challenges put to the Church through the “restlessness of young people”.