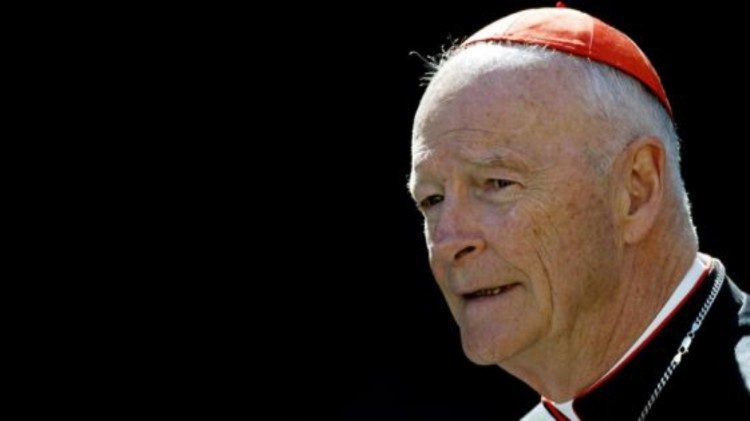 After the publication of the accusations regarding the conduct of Archbishop Theodore Edgar McCarrick, the Holy Father Pope Francis, aware of and concerned by the confusion that these accusations are causing in the conscience of the faithful, has established that the following be communicated:

In September 2017, the Archdiocese of New York notified the Holy See that a man had accused former Cardinal McCarrick of having abused him in the 1970s. The Holy Father ordered a thorough preliminary investigation into this, which was carried out by the Archdiocese of New York, at the conclusion of which the relative documentation was forwarded to the Congregation for the Doctrine of the Faith. In the meantime, because grave indications emerged during the course of the investigation, the Holy Father accepted the resignation of Archbishop McCarrick from the College of Cardinals, prohibiting him by order from exercising public ministry, and obliging him to lead a life of prayer and penance.

The Holy See will, in due course, make known the conclusions of the matter regarding Archbishop McCarrick. Moreover, with reference to other accusations brought against Archbishop McCarrick, the Holy Father has decided that information gathered during the preliminary investigation be combined with a further thorough study of the entire documentation present in the Archives of the Dicasteries and Offices of the Holy See regarding the former Cardinal McCarrick, in order to ascertain all the relevant facts, to place them in their historical context and to evaluate them objectively.

The Holy See is conscious that, from the examination of the facts and of the circumstances, it may emerge that choices were taken that would not be consonant with a contemporary approach to such issues. However, as Pope Francis has said: “We will follow the path of truth wherever it may lead” (Philadelphia, 27 September 2015). Both abuse and its cover-up can no longer be tolerated and a different treatment for Bishops who have committed or covered up abuse, in fact represents a form of clericalism that is no longer acceptable.

The Holy Father Pope Francis renews his pressing invitation to unite forces to fight against the grave scourge of abuse within and beyond the Church, and to prevent such crimes from being committed in the future to the harm of the most innocent and most vulnerable in society. As previously made known, the Holy Father has convened a meeting of the Presidents of the Bishops’ Conferences from around the world for next February, while the words of his recent Letter to the People of God still resonate: “The only way that we have to respond to this evil that has darkened so many lives is to experience it as a task regarding all of us as the People of God. This awareness of being part of a people and a shared history will enable us to acknowledge our past sins and mistakes with a penitential openness that can allow us to be renewed from within” (20 August 2018).