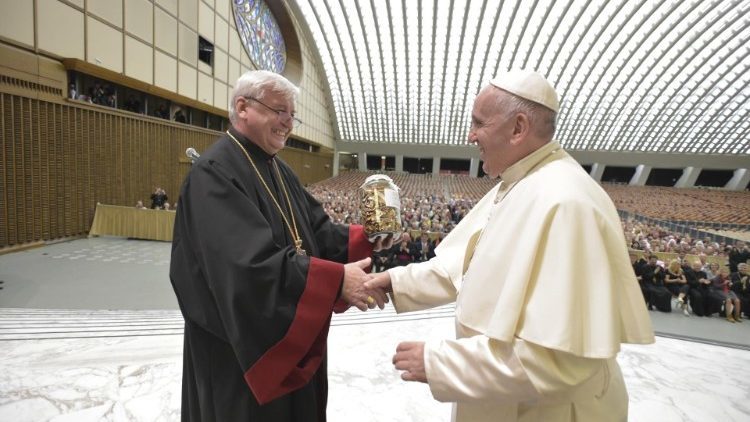 It’s been 200 years since the Prešov Eparchy, was born from the dismemberment of the Eparchy of Mukačevo. The present Eparchy has developed to form other eparchies, such as in Canada, which became the headquarters of the Metropolia sui iuris ten years ago.

In prepared remarks to the Bishops and pilgrims present on Saturday, Pope Francis, quoting from his predecessor St John Paul II described the Greek-Catholic Church in Slovakia as exemplifying “the beauty and goodness of the Creator.”

Addressing the Bishops present, the Pope invited them to continue their work as guides and fathers of the people of God who have been entrusted to them. He also called on them to, “spread goodness, peace, generosity and meekness, with profound humility and simplicity.”

Eastern Catholic churches have their own liturgical, spiritual, and theological traditions, while remaining in communion with the Pope. They share with the Orthodox churches a common Christian heritage, received from the Apostles and handed on by the Fathers. Like the Orthodox, they have preserved a married priesthood; that is, married men are able to be priests. Once a man has been ordained, however, he is not subsequently permitted to marry.

In his words, Pope Francis said that, “the families of priests live a particular mission today, when the very ideal of the family is questioned if not explicitly attacked: you bear witness to a healthy and exemplary life.”

He went on to say, “you too can draw from the examples present in the history of your Church during the decades of persecution in the second half of the last century, in deportations and deprivations of all kinds. Today, Pope added, “it is up to your generation to show the same loyalty, perhaps not in the face of direct and violent persecution, but in the presence of difficulties and dangers of another kind”, that of secularism, and sterile clericalism.

Europe and its’ Christian roots

Turning his attention to the pilgrims present, the Pontiff told them that, “the continent of Europe, in the East as in the West, needs to rediscover its roots and vocation; and from Christian roots they can only grow solid trees, which bear fruits of full respect for the dignity of man, in every condition and in every phase of life.”

He also encouraged the pilgrims gathered to be custodians of their Byzantine tradition, and paid a special tribute to parents and grandparents from whom the many present, he said, had learned their first prayers. In his concluding remarks, Pope Francis prayed to Our Lady for her intercession for the Church in, as he put it, “this time of trial and watch over the work of the Synod on Youth.”