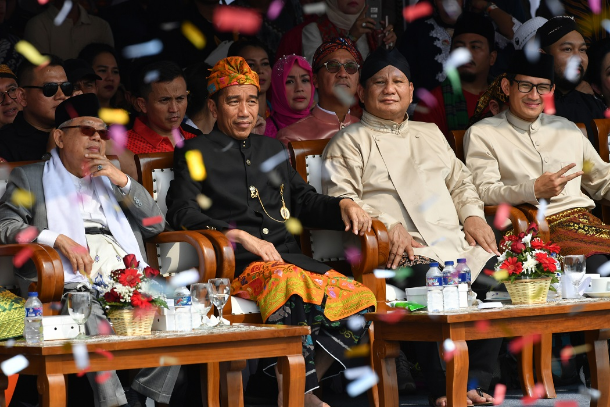 Hoax news is a big issue on the major stage: think alleged Russian interference in the U.S. presidential election. Leaders — and would-be leaders — everywhere are keen to take advantage of it if it supports them.When a hoax is discovered to be a hoax, it can backfire badly, as Indonesian presidential candidate Prabowo Subianto and his allies found out earlier this month.They were suitably appalled and outraged by a reported attack on activist and Subianto campaign team member Ratna Sarampaet, rushing to denounce the attack to the media.Fadli Zon, right-hand man to Subianto at his Great Indonesia Movement (Gerindra), rushed to have his photo taken aside Sarumpaet and her battered face.The former theater director, dancer and actress has long been a promoter of human rights, and in recent years she has busied herself with activism, most lately in support of Subianto’s bid to oust incumbent Joko Widodo in the country’s general election next April. Now, having revealed that the assault story was all a piece of fiction, she’s been forced to quit his campaign team and been arrested by the police.

According to Sarumpaet’s original story, she had been assaulted on Sept. 21 by three men in a car park when leaving an international cultural seminar in Bandung, south east of Jakarta.While it’s still not clear who initially set the story doing the rounds of social media, a photo of her battered face spread quickly. Subianto’s supporters were voluble in their outrage at this abuse, immediately linking the alleged assault to their opponents in Joko Widodo’s camp.A police investigation found, however, that there had been no international cultural seminar in Bandung, her name was not on the manifest of any flights back to the capital, and in fact she’d been seen entering — and a few days later leaving — a Jakarta plastic surgery clinic.Sarumpaet then admitted that she’d actually been having fat removed from her face at the clinic, hence the bruising. She said she’d made up the assault story to tell her children because, presumably, at the age of 69 she felt embarrassed about her vanity in undergoing the expensive operation.Subianto, Fadli Zon and many more were forced to back down and apologize. Vice-presidential candidate Sandiaga Uno, who’d been one of the chorus lined up to attack brutal government tactics, was forced to change his tune and threatened to report Sarumpaet to the police.In one interview, Subianto said it was possible that she was under severe mental pressure.”I hear from her family that Ratna is extremely busy and her economic situation is difficult. I hear there are indications she is suffering from severe mental strain,” said Subianto, flanked by a shamefaced Uno and Amien Rais, a former hero of Indonesia’s reform movement who has steered increasingly to the right of late.Meanwhile, police reports were lodged by Widodo supporters against all the opposition politicians who had pointed the blame at Widodo’s side of the political divide.Farhat Abbas, a lawyer and spokesman for Widodo’s campaign team, filed a police report against Sarumpaet herself, Subianto, Uno, Fadli Zon and 13 others for spreading the assault story on social media,Finally, the police picked Sarumpaet up as she was about to leave the country to attend a cultural festival in Chile, all paid for by another Subianto ally, Jakarta governor, Anies Baswedan.Questions were raised too about the speed with which the city government found the funding for her trip.Sarumpaet potentially faces prosecution under the 2016 Electronic Information and Transactions Law, under which anyone found guilty of spreading hoaxes on electronic media can face up to six years in prison, or a fine of up to Rp 1 billion ($660).Some complained that the Indonesian public was paying so much attention to what appeared to be a trivial issue when hundreds of thousands were suffering in the wake of Sept. 28’s deadly earthquake and tsunami in Central Sulawesi.Yet while the Sarumpaet case was more like a telenovela than an issue of real importance, it showed how quickly elite politicians are to grasp any opportunity to smear dirt on their opponents.It had been hoped — and politicians had promised — new standards would be set in the wake of the damaging attacks on former Jakarta governor Basuki Tjahaja Purnama in 2016 and 2017.Accused of blasphemy over a quotation from the Koran, more than 100,000 hard-liners turned out for two large demonstrations in Central Jakarta, demanding that he be arrested and put on trial.Ever since his election as running mate to Widodo when the latter became governor in 2012, hard-liners had refused to accept him as a leader because he was not a Muslim. The pressure intensified when the ethnic Chinese Purnama took over from Widodo when he was elected president two years later. He is now reaching the end of a two-year jail sentence.At least two ‘dirt for hire’ syndicates willing to put salacious gossip onto the internet have been tracked down by police since then. One, the Muslim Cyber Army, claimed that dozens of Islamic clerics had been assaulted by leftists and that the outlawed Indonesian Communist Party (PKI) was on the rise.Dirt has probably been a factor in politics since the days of the cave man, but the speed with which messages can be transmitted to countless numbers of people via cyberspace has made it a far more effective weapon.Indonesia’s police force, armed with the new legislation against hate speech, has been busy chasing up cases where politicians and others have been defamed online.As for Sarumpaet, she had some reason to be pleased with what might have been her last performance in front of a once-supportive public. “This time I have created the best hoax ever. I have fooled the entire country,” she told the press conference where she admitted she had made the assault story up.